Home Nissan Is the Nissan Titan Warrior Concept Getting the Green Light? 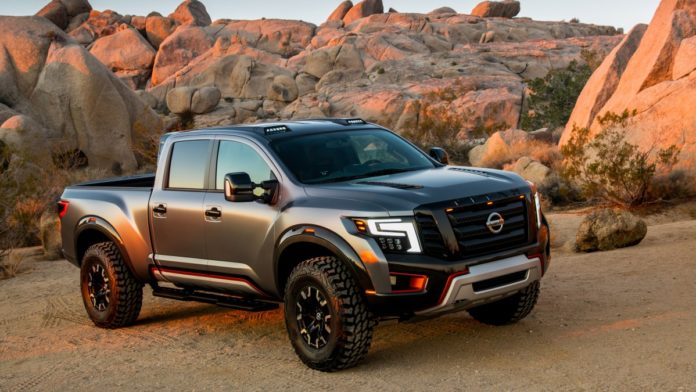 Remember when Nissan introduced its Warrior Concept back in 2016. This model has been introduced at the Detroit Auto Show and since then, it has been a subject of various rumors. Now, Nissan Titan Warrior Concept is closer than ever. At least according to the latest reports. Warrior is a great concept that should offer better off-road capabilities and much more.

The idea is to deliver a pickup truck that is three inches taller than the Titan XD variant. Moreover, numerous off-road equipment will do the job as well. However, is it really going to happen? The latest reports are saying yes, so Ram Rebel and Ford Raptor could get another true competitor. Let’s see what we can expect from the Titan Warrior model.

According to a concept, Warrior should be three inches taller than the Titan XD pickup truck. Moreover, Nissan Titan Warrior Concept will be six inches wider than the XD version. Warrior is meant to be a true off-road pickup truck. Because of that, the Japanese manufacturer will offer unique 37-inch tires and various off-road equipment. Its design has great potential, to be honest.

Nissan introduced a design that should make a real standout in the crowd with its rugged appearance and meaner look. Nissan even added a couple of sporty vibes and overall, the pickup truck looks truly unique. Bolder bumpers, narrow taillights and 18-inch wheels are perhaps a highlight of the arriving model.

In terms of interior design, the Nissan Titan Warrior Concept looks surprisingly well. The level of comfort is admirable for a pickup truck and interior layout is impressive. Like other manufacturers, Nissan also tries to deliver an SUV-like interior. That means you can count on numerous high-tech amenities and larger displays. The dashboard looks really unique and the sporty steering wheel is what we like the most.

Additionally, Titan Warrior wears a lot of carbon-fiber materials and chrome accents. Nissan plans to offer two interior color schemes and one is a darker scheme with orange accents. Unfortunately, production models usually depart from the concept so we are still waiting to see official info.

Nissan Titan Warrior Concept has been designed to ride on a 5.0-liter V8 engine. This turbodiesel can generate 310 hp and 555 lb-ft of torque. It uses a 6-speed automatic transmission and it tows up to 12,400 pounds. Another option is a twin-turbo gasoline version. However, the most likely outcome is a 3.8-liter V6 with 250 horsepower and 400 lb-ft of torque. Manual transmission is another rumor but fans would love to see it for sure.

There are plenty of yes and no answers. For a start, Nissan already offers the PRO-4X package. It isn’t enough to rival Ford Raptor or Ram Rebel but it is more than enough. Moreover, Nissan Titan didn’t manage such great sales in the last two years. For that reason, Nissan Titan Warrior Concept will remain a concept, for now. That is our honest opinion. Maybe Japanese automaker plans to utilize Frontier pickup and mix it with the concept in some special version.

Frontier is a mid-size pickup after all, and the mid-size segment dominates the pickup truck world at the moment. It won’t rival Raptor or Rebel, but Ford Ranger, Toyota Tacoma, and Chevy Colorado are tough nameplates to beat as well. It would be great to see this concept in one way or another, it doesn’t matter.