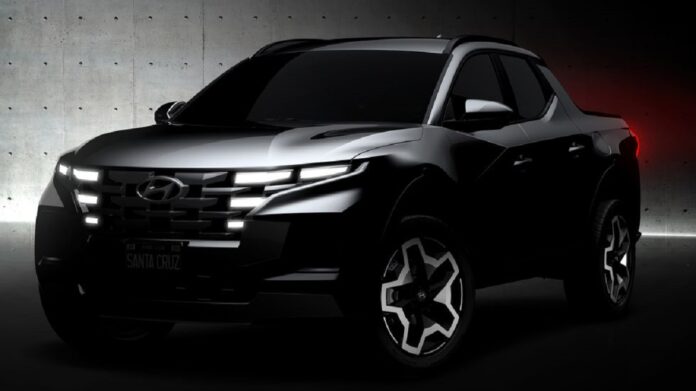 The latest version of the famous 2022 Hyundai Santa Cruz, has been teased ahead of its debut on April 15. Generally, the first impressions are positive, and the new pickup truck promises attractive styling and an even better interior.

Hyundai released a few teaser photos, and thanks to that, we can see how this model looks. Overall, the design is beautiful, and we first noticed the same angular front fascia, similar to that we saw on the latest Hyundai Tuscon SUV. Basically, both models share the same platform, a similar grille, and the same-shaped LED headlights. Besides, Santa Fe also borrows one of Tucson’s hybrid powertrain.

The teaser photos of the upcoming 2022 Hyundai Santa Cruz are revealing fresh and new styling. As we mentioned, the same design language we saw on the Tucson SUV, on which platform this truck sits. The photos show the attractive grille and the same headlight system as on the Tucson.

Overall, the new truck looks much sportier than any other pickup truck in the class. The appearance is sleek, and the Santa Cruz features C-pillar that slants toward the bed. Like the recently revealed rival Ford Maverick, the Santa Cruz name is prominently displayed across the tailgate.

The upcoming 2022 Hyundai Santa Cruz is the pickup truck that hosts identical interior styling as the popular Tucson model. However, the new teaser images don’t show its interior styling. What we hear is that the new Hyundai Santa Cruz will be more modern inside with much more quality materials than before. Also, we should expect the base model to come with cloth seats and Hyundai’s 8-inch touchscreen. Surely, the Apple CarPlay and Android Auto connectivity are standard, as the wireless smartphone charging, too.

The fresh new 2022 Hyundai Santa Cruz will deploy the most efficient powertrain options. Like the flagship Tucson model, the new pickup truck will most likely use the same engines. That means Santa Cruz could get a 2.5-liter naturally aspirated I4 and the 1.6-liter turbo I4 paired with an electric motor.

The latest Tucson with the hybrid system delivers an excellent output of 261 horsepower and 258 pound-feet of torque. Unlike the SUV model that uses a 6-speed automatic transmission, the new pickup truck will most likely use an eight-speed gearbox.

The refreshments of the Hyundai Santa Cruz are happening, and that’s the most exciting news. Hyundai recently released a new batch of teased images, revealing a new fresh look. Generally, the upcoming truck shares the same platform with the Tucson SUV as many other components.

According to the manufacturer, the debut of Hyundai Santa Cruz will happen on April 15. Unfortunately, pricing is not yet available, but expect it to be a thousand dollars more than before. In the same class is the upcoming Ford Maverick, which is the main reason why refreshments on the Santa Cruz happens.