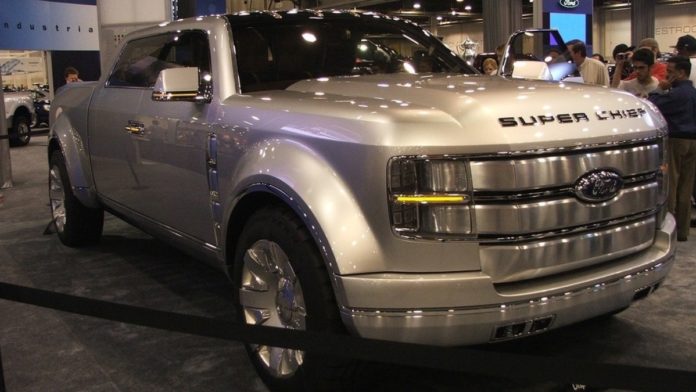 Remember Ford Super Chief? It was a concept from 2006 when Ford revealed it at the NAIAS in Detroit. It was a concept that draws so much attention and for a reason. Now, fourteen years later, we still remember it and everyone hopes to see the production model in the near future. For now, Super Chief remains just a concept. On the other hand, this model is still a subject of numerous speculations that are saying “this is the year.”

Reality is different, unfortunately. However, it could happen in the next couple of years, why not. Ford Super Chief was a truck with a supercharged V10 engine that combines gasoline, E85 ethanol, and hydrogen. It is a Blue Oval’s way to mix interior of the luxury car and the versatility of the truck. Take a closer look and see why we still remember this concept.

Based on the Ford F-250 model, Ford Super Chief Concept delivers it all. It is a bold-looking truck that provides reliability, luxury, and versatility. Super Chief is as flashy as one truck can get, probably even more than that. It comes with impressive 24-inch alloy wheels and the suicide doors. Moreover, the glass roofing wrapped in leather looks truly astonishing. It is no ordinary truck.

Super Chief comes with 79 inches of ground clearance and it features a boxy shape. Some cues are looking similar to the F-150 model, such as LED headlights and taillights. We like Ford’s “game of chromes.” Chrome materials and accents are everywhere. Of course, the times have changed and if Ford plans to create this model it will have to depart from the original 2006 concept.

Forget about the days when trucks were just rugged workhorses with a simple design. Today, you just can’t see a spartan interior or anything similar in the truck segment. However, Ford Super Chief was introduced as a concept in 2006. That version could easily tackle every truck that exists now. Logically, it will require technological updates.

As for the comfort and level of luxury, Super Chief still looks the best, even after fourteen years. Trucks today are looking like modern sedans in terms of interior. Ford had the same thought more than a decade ago. Super Chief was full of luxury and it offered a lot of interior room. We won’t speculate how this truck could’ve looked like today but we are sure it would become a leader in its class.

Running on a Tri-Flex Powertrain

Amazing exterior design and luxury interior are nothing, compared to the engine. Ford Super Chief is a concept that introduced a supercharged V10 engine. This would be the very first truck to run on three different types of fuel: gasoline, E85 ethanol, and hydrogen. A 6.8-liter V10 Tri-Flex is the name of the powertrain and you can see why.

Ford’s idea was amazing and it still is. Tri-Flex engine reduces emissions by 99 percent over the regular gasoline displacement. Ford said it will produce around 510 horsepower and 400 lb-ft of torque. Plenty of power, no carbon dioxide, and improved fuel efficiency. Is there anything else you need?

Of course, the price is not available. However, some experts are predicting the price of around $65,000. It is still just a concept that plenty of us hopes to transform into a production model. Some rumors are still writing about the sales of this model. However, it won’t happen anytime soon, unfortunately.