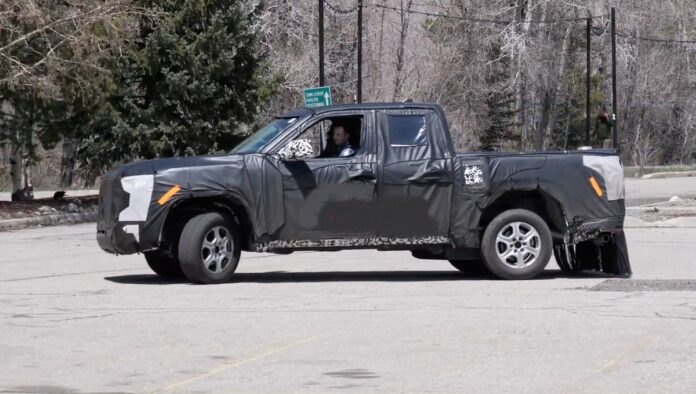 The new 2024 Toyota Tacoma Prototype has been spied recently testing, featuring many visible upgrades. At first glance, it seems that the next-generation truck is larger than before, and it wears a more attractive front end. Moreover, the heavy camouflage is present and is hiding the new cab and the bed that appear to be a bit smaller than on the sibling Tundra.

We expect the new model to share the same TNGA-F platform that also underpins the Tundra and the new Sequoia. The highlight this time is definitively a new powertrain. As far as we know, Toyota will package the new Tacoma with a turbocharged four-cylinder, which is the same that’s powering the current Lexus NX350.

Despite heavy camouflage, many changes and upgrades are visible on the upcoming 2024 Toyota Tacoma. First of all, the new truck seems refreshed in both front and rear, and it will definitively use the same TNGA-F platform that underpins Tundra and the new Sequoia.

The heavy camouflage is unfortunately present, and it hides a shorter and narrower chassis when you compare it to the Toyota Tundra. Also, the cab and the bed appears to be a bit smaller, and we noticed a new exhaust system. Overall, as you can see, the design is more attractive, and we believe that the next-gen model will get more competitors in the mid-size segment.

Unfortunately, we don’t have any spy shots on what changes are made inside. Probably, the manufacturer will introduce a more comfortable cabin with the same seating arrangement. So far, the Toyota Tacoma was one of the spacious trucks in its segment, offering seating for up to five passengers.

We also believe Toyota will add more quality materials and some new technologies to stay competitive. So, don’t be surprised if the manufacturer adds a new larger infotainment system similar to the one we saw on the most complete Ram 1500.

Under the hood, some good things will happen, and the 2024 Toyota Tacoma will finally come with a new engine. From what we know so far, the manufacturer will use an existing engine that is currently under the Lexus NX350. This model uses a turbocharged four-cylinder 2.4-liter engine that is capable of making 275 horsepower and 317 pound-feet of torque.

That engine uses an eight-speed automatic. As in case with the new Tundra, the Tacoma might also be available with an optional hybrid system. The hybrid model should work in combination with the V6 powertrain and electric motor.

When Can We Expect the new 2024 Toyota Tacoma?

We expect the new 2024 Toyota Tacoma to debut next year as the 2024 model. Toyota hasn’t said anything on how much the ’24 Tacoma will cost or what trim levels will be available. In general, the buyers can expect a slight price bump over the current version, which starts at $28,000.