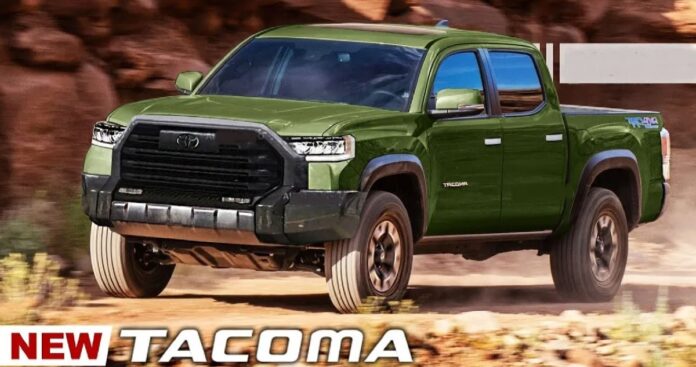 The new 2024 Toyota Tacoma pickup truck is in the development stage, and the latest spy shots confirm that. The forthcoming truck was caught testing a few days ago covered in a thick vinyl wrap that hides the entire design. Fortunately, we have some renderings which reveal the same new design language we saw recently on the introduced Tundra model.

Unlike before, the latest Tacoma looks more attractive thanks to a new grille, swept-back headlights, an angular face, boxy fender flares, and black trim. According to the information we have, the new truck will be available with a gasoline, hybrid, or all-electric powertrain.

The new renderings are available to the public, and we must admit, the upcoming 2024 Toyota Tacoma looks better than ever. First and foremost, the renderings show the same updated design language as we saw on the latest Tundra truck. We like the new truck because it has more dominance in the front.

It features swept-back headlights, an angular face, boxy fender flares, and some black trim on some parts of its body. We also noticed more sharp, angular creases in the body, and a sportier hood up front.

Unfortunately, the new renderings don’t provide a peek at the interior at this time. However, the spy shots that are available reveal some interesting details. It appeared to reveal the new Tacoma cabin that is much more modern with the same seating layout. We also saw a new and larger infotainment screen, which indicates a significant interior upgrade over the current truck’s cabin.

In general, we’re expecting the new Tacoma to share many design elements with the Tundra. So, the safety department will be better with a longer list of features. The current model as standard includes forward-collision warning with automatic emergency braking and pedestrian, automatic high beams, and adaptive cruise control.

Under the hood, it seems that the new 2024 Toyota Tacoma will be powered by a few engine options. According to Toyota, the new truck will be offered with a gasoline, hybrid, or all-electric powertrain. However, the exact powertrain details, like output, engine size, and more, remain a mystery so far.

In case you didn’t know, the current Toyota Tacoma is powered by two engine options, including a 2.7-liter four-cylinder engine or a 3.5-liter V6. Anyway, we don’t have any clue if Toyota will continue to offer these engines anymore.

At this point, we don’t know how much the 2024 Toyota Tacoma

would cost. Anyway, we’re expecting the new truck to arrive sometime next year as the 2024 model year. According to some reports, Toyota had planned to begin production in August 2022, but the company had to push it back to January 2023.

So, that means the new truck won’t go on sale until the fall of 2023. When it goes on sale, the new truck will try to compete with the Chevrolet Colorado, Ford Ranger, and Honda Ridgeline.