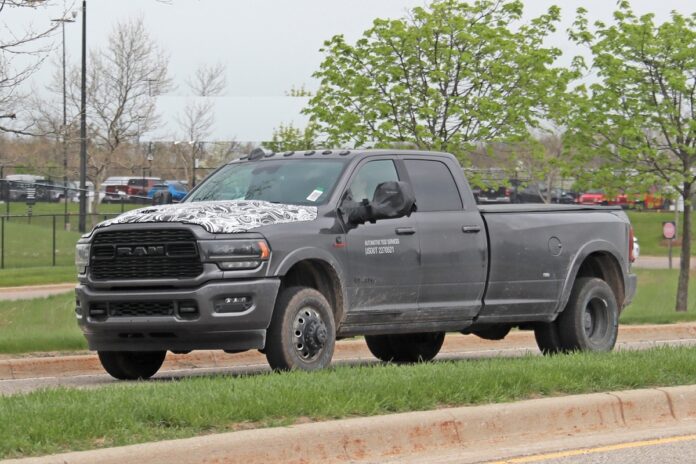 The new 2024 RAM 3500 HD has been finally caught in testing, hiding a subtle refresh. It’s been a while since Ram updated its 3500 HD truck line, and we’re glad that’s finally happening. In case you missed it, the most recent substantial change was two years ago, when the 3500 got a mild refresh.

However, judging by a new spy shot, it seems that the spotted 3500 HD was caught testing in dual form. Only a few parts are visible, which shows us only a subtle update. The refreshed 3500 HD is set to debut next year as a 2024 model.

The 2024 Ram 3500 HD was spotted recently undergoing testing in dual form. As far as we can see, the new truck will receive only subtle updates. Most of the changes will be implemented upfront. In particular, the design will be more modern, featuring some changes on the hood.

We also noticed a cover that is probably hiding a ram air intake similar to what we saw on the truck twins, the Chevy Silverado and GMC Sierra. The rear should also be revised, and we expect to see new taillights and an exhaust system.

According to RAM, the new HD model will be the first one in line that will introduce a more comfortable cabin with more quality materials. Magna’s Clearview camera monitoring system will come as standard. The frameless rearview mirror can be electronically switched between a traditional rear-view mirror and a video display.

Also, the digital display has a customizable field of view and can show more camera views at the same time. According to sources, this model will also get some new tech as well. It is also worth mentioning that the RAM 3500 HD has a very spacious cabin, which also depends on the chosen cab.

Unfortunately, we don’t know yet what changes will happen under the hood of the forthcoming 2024 RAM 3500 HD truck. So far, this model is offered with a gasoline-powered 6.4-liter V8 generating 410 horsepower. This engine has a cylinder deactivation feature, which helps it save a bit of fuel during light use. It is also connected to an 8-speed automatic transmission with rear-wheel drive. All-wheel drive is optional on all trims except the Power Wagon.