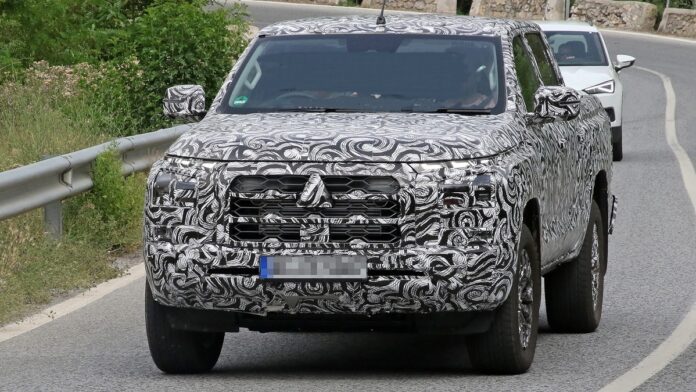 The new-generation 2024 Mitsubishi Triton has been spotted testing recently in Europe, wearing Mitsubishi’s latest design language. Despite the heavy camouflage that’s hiding the ute’s body, we managed to see some changes and updates.

As part of the Renault-Nissan-Mitsubishi Alliance, the Triton will share its platform with the next-generation Nissan Navara. Also, the new truck will adopt Mitsubishi’s current front-end design language. This means it will come with new daytime-running lights and with headlights that will be bordered by ‘eyebrows’ in chrome. We’ve seen a similar design on recently introduced models like the Eclipse Cross, Pajero Sport, and Outlander.

The new 2024 Mitsubishi Triton looks refreshed, and it shares a platform with the next-generation Nissan Navara. Judging from the first spy shots, the forthcoming truck wears the latest Mitsubishi design language. It also comes with an attractive front end that’s changed thanks to new daytime-running lights and with headlights bordered by ‘eyebrows’ in chrome.

As we said, the similar design we saw on the models is the Eclipse Cross, Pajero Sport, and Outlander. The grille of this truck is also new with a straight-forward rectangular shape and a Mitsubishi badge. We also know that the new truck will come with a longer wheelbase and a wider wheel track. This should improve road handling and increase cabin space.

The technology inside will be updated, and the manufacturer will introduce a larger infotainment system, as well as a plethora of standard equipment. The list is not yet revealed, but it will be much longer than before. Also, expect many new drivers assist features.

There’s no word yet on what engine will power the new 2024 Mitsubishi Triton. However, back in September 2021, a senior manager at Mitsubishi revealed that the next-generation Triton would be offered with some kind of electrification. So, because of that statement, we can safely assume that it will come with a plug-in hybrid petrol engine.

In case you didn’t know, the same engine powers the current Outlander and Eclipse Cross models. If true, this would mean that the Triton will probably send power through a continuously variable transmission.

Thanks to a new spy shot of the 2024 Mitsubishi Triton, we got a taste of what the company is cooking up for future trucks. As we said, judging by the photos, it seems that the next-generation truck will adopt the same design language as the recently introduced Eclipse Cross, Pajero Sport, and Outlander models.

Unfortunately, the manufacturer didn’t reveal any information regarding the pricing of the new truck or release date. From what we heard, the upcoming model could start at a little less than $30,000, while its release date may happen in the second half of next year.