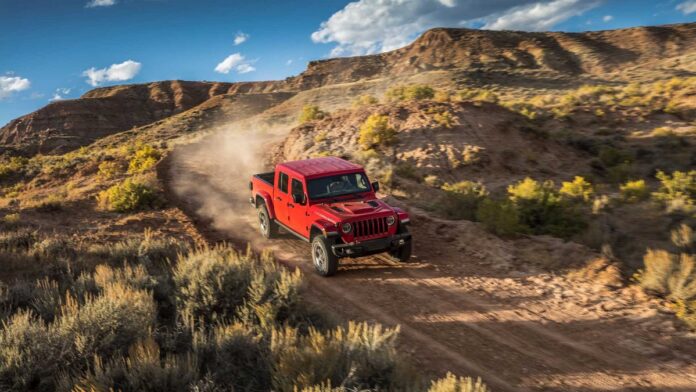 According to Jeep, the updated Gladiator will be released next year, featuring the new electrified system. From what we know, the forthcoming 2024 Jeep Gladiator will use the same engine as the current Wrangler 4xe. This means we can expect a PHEV system combination of a turbocharged 2.0-liter 4-cylinder engine (running on regular gasoline) and two electric motors. The electric motors use a lithium-ion battery that sits under the rear seats.

The whole system produces an output of 375 horsepower and 470 lb-ft of torque. However, besides the same engine, we’re also expecting the new Gladiator to use many design cues from the Wrangler SUV, even more than before.

On the cosmetic front, the 2024 Jeep Gladiator will not reportedly differ from the model before. The same boxy and unique styling will be there, just as the windshield, doors, and top are removable. The same setup we saw on the Wrangler model. Moreover, the design will vary depending on the trim level.

Inside, we’re expecting to see many designs styling as in the Wrangler 4xe model. The 2024 Jeep Gladiator is a very spacious truck that has enough room to fit up to five passengers. From what we know, the manufacturer will add more quality materials and make the cabin more comfortable.

As we said, like the recently introduced Wrangler 4xe, the new 2024 Jeep Gladiator will likely use the same PHEV system as well. The current Wrangler uses a turbocharged 2.0-liter 4-cylinder gasoline engine and two electric motors. The electric motors use lithium-ion batteries producing an output of 375 horsepower and 470 lb-ft of torque.

It is also worth mentioning that the engine uses an amazing TorqueFlite eight-speed automatic gearbox. Anyway, besides the PHEV model, the electric one is rumored as well, but unfortunately, we don’t know anything so far about it.

As mentioned above, the new 2024 Jeep Gladiator will probably use the same platform and engine as the Wrangler Unlimited 4xe model. Since it is going to be at least PHEV-powered, it’s reasonable to expect that the price range will be increased. The current model has an MSRP of $39,680, so expect Gladiator 4xe to start at around $50k.

If this proves to be accurate, the new truck will face off against competition like the Chevy Silverado EV, Ford F-150 Lightning, and Rivian R1T. Jeep, unfortunately, didn’t provide us with an estimated release date, but from many reports, we should expect the new model to debut in mid-to-late 2023 as a 2024 truck.

2023 Jeep Gladiator: What Can We Expect?

2022 Jeep Gladiator Spied Testing For the First Time This Year