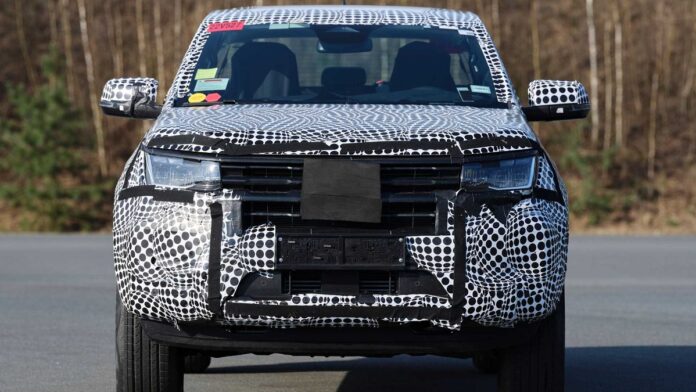 According to latest news, the forthcoming 2023 Volkswagen Amarok pickup truck will arrive later this year, sharing many things with the famous Ford Ranger model. In case you didn’t know, Volkswagen signed a partnership with Ford, and the new Amarok is about to adopt Ford power, the same body-on-frame chassis, suspension, and some of advanced techs.

First and foremost, the 2023 Volkswagen Amarok will ride on the same chassis as the Ford Ranger. This means we can expect the next Amarok to be much bigger than before. Also, some of the spy shots are available, and the new truck looks refreshed. It features revised front fascia that wears an attractive and wider grille, some bodywork including a uniquely-styled bonnet, LED headlamps, front fenders, and also individual suspension tuning.

The rear of this truck is no less attractive, and we noticed a new tailgate that features a big Amarok name stamped into the metal. According to VW, the new Amarok will use wheels that extend from a standard 17-inch package, up to a 21-inch rim for upper trims.

The new 2023 Volkswagen Amarok is a modern and very comfortable pickup truck. Interestingly, unlike the outgoing model, the forthcoming one comes with a similar architecture as the Ford Ranger. However, for 2023YM, the manufacturer will introduce numerous touches to step up the comfort and quality compared to the other rivals in the segment.

The 8.0-inch digital instrument cluster and the new infotainment screen of 10.1-inch is standard, while the larger 12.0-inch comes optionally. As you may notice, the screens are the same as those in the Ford. The new VW Amarok will also come with more than 30 driver-assistance systems, which is a big step over the outgoing model.

However, we don’t know if all the engines will be employed or only some of them. Depending on engine, there will be a choice of a standard rear-wheel-drive model or four-wheel-drive systems, according to Volkswagen. We also heard that the payload capacity has been increased to 2,645 pounds, while the towing capacity is 3,500 kg (7,716 lbs).

The new 2023 Volkswagen Amarok will reportedly arrive later this year, sharing many features with the Ford Ranger model. It shares the same structural hardpoints, while other things like roof, mirrors, door handles are going to be carried over. As for the price, the manufacturer didn’t mention it, but from many reports, it will be around $30.000.