Home Toyota 2023 Toyota Tundra Will Probably Be Powered by a New Twin-Turbo V6... 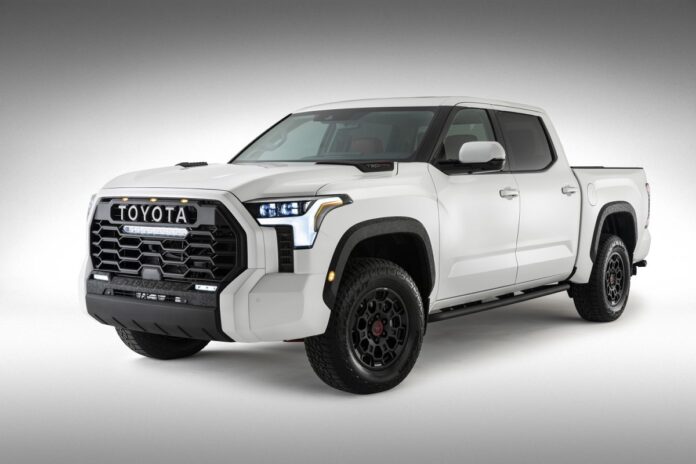 The leaked image of the new-generation, 2023 Toyota Tundra, reveals many interesting visual upgrades. First of all, the upcoming pickup truck looks more stylish compared to the outgoing model. It will also ride on a new modular platform that underpins the next-generation Tacoma, 4Runner, and Sequoia models.

Based on the wheels and lettering stamped into the tailgate, it seems that the captured model is the off-road-oriented TRD Pro variant. Anyway, some rumors indicate that a 5.7-liter V-8 will likely be replaced with a new twin-turbo V6. Also, the hybrid version is on the way as well, but only as an option. Here’s everything that we know about the upcoming Tundra.

The first impressions about the new 2023 Toyota Tundra are very positive. This pickup truck gains significant changes on the exterior. While the overall profile remains the same, the forthcoming model comes with a completely new front end. Generally speaking, the design reminds us of the 4Runner SUV.

On the front, it features a sizeable black grille with hexagonal openings and bulky Toyota branding. Another interesting tidbit is the LED light bar underneath the Toyota logo and the much smaller LED headlights. The truck also has modest black fender extensions and beautiful black wheels.

At this point, there is no official information regarding the engine of the 2023 Toyota Tundra. Many believe that the upcoming truck will introduce some of the new powertrains, replacing the aging 5.7-liter V-8. The first candidate is a twin-turbo V-6 that is also available on some of the Toyota models. This powertrain should produce almost the same amount of horses as the variant it replaces. The next powertrain could use a new hybrid system.

Considering that the first leaked images appeared two days ago, we expect an official statement from Toyota anytime soon. As we mentioned, according to the photos, it seems that captured model is the off-road-oriented TRD Pro variant. This pickup truck should cost just over $50,000, while the base truck’s starting price is expected to be around $36,000.

Moreover, the hybrid variant is in the works as well, and it could start at about $40k. The new Tundra will be fully unveiled next year, and it might go on sale shortly after. Expect more official details and specs in the coming months.