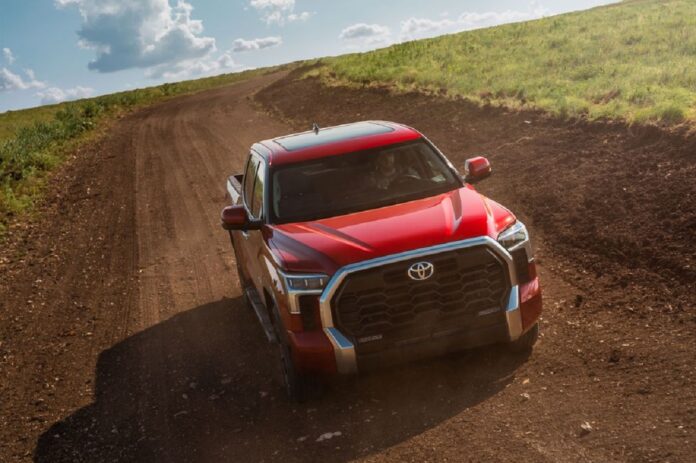 The new off-road-oriented 2023 Toyota Tundra TRD Pro should arrive next year, and it will once again stack up against its rivals such as the Chevy Silverado 1500 ZR2, Ford Ranger Raptor, and Ram 1500 TRX. Unlike before, the forthcoming TRD Pro model will be powered by a standard hybrid powertrain, and it should use an upgraded all-coil suspension layout.

Under the hood is a hybridized twin-turbocharged 3.4-liter V6 powertrain connected to a small electric motor, delivering combined 437 horsepower and 583 pound-feet of torque. Noteworthy, the manufacturer will also make many changes inside, providing a more comfortable cabin, filled with plenty of new technology.

Visually, the forthcoming 2023 Toyota Tundra TRD Pro looks unique and is much more eye-catching than the model it replaces. The overall shape of this truck stays the same, while the front end is completely new. We can proudly say that the design is similar to that on the latest Toyota 4Runner SUV.

It has a huge step for Toyota, and we like the front end that now hosts a large black grille with hexagonal openings. We also noticed a new LED light strip behind the Toyota symbol and somewhat smaller LED headlights. Along with protective underbody skid plates, the new TRD Pro rolls on 18-inch wheels wrapped with all-terrain tires approximately 33 inches tall, which are connected to new suspensions and solid rear axles.

The interior of the 2023 Toyota Tundra TRD Pro will be much more premium than before. As far as we know, the manufacturer will make some significant improvements for 2023YM. First of all, the new model will keep the same seating layout, but it should be significantly more comfortable than the outgoing model.

Everything inside is upscale, and the TRD Pro will be able to fit five passengers comfortably, with a front shoulder space of up to 65.6 inches. On top of that, expect also enough legroom, especially on the back. Considering that the TRD Pro is the top-of-the-line trim level, we presume more luxury than the other trims. Toyota will offer this time an upgraded 12.3-inch infotainment touchscreen, supporting all smartphone connectivity.

The upcoming 2023 Toyota Tundra TRD Pro will deploy a new powertrain. As far as we can tell, the manufacturer will use a twin-turbocharged 3.4-liter V-6 good for a combined 437 horsepower and 583 pound-feet of torque.

The engine uses a small electric motor, which harnesses power from a 10-speed automatic transmission. In the same class, Ford offers a similar, but slightly less powerful PowerBoost hybrid option with its F-150. If you want more power, you can check out models like the six-cylinder Silverado ZR2, or the Ram 1500 Rebel powered by a mild 48-volt hybrid assistance.

In general, the slight price increase is logical, given the number of updates and changes. According to Toyota, the famous Tundra TRD Pro truck will hit the dealerships in the third quarter of 2022.