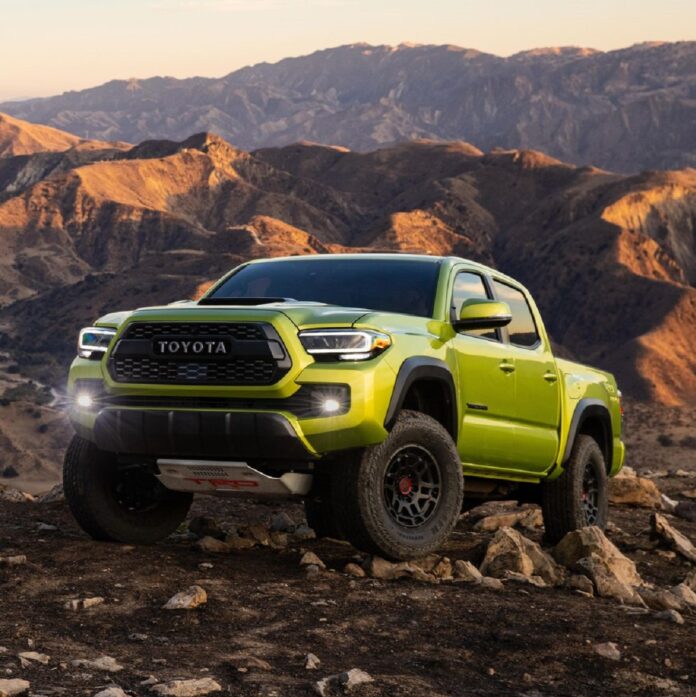 The new 2023 Toyota Tacoma TRD Pro will arrive next year, and it will be reportedly updated with new colors, a slightly refreshed appearance, and a new suspension setup. Toyota dominates in the mid-size segment, and the upcoming Tacoma TRD Pro looks much better than the previous generation.

Unlike before, this truck looks slightly taller, and it comes with new wheels. The lesser Trail Edition should also be available, and compared to TRD Pro, this model is somewhat less jacked up. Moreover, both models will go on sale sometime next year, probably in the second half.

The new 2023 Toyota Tacoma TRD Pro looks better than ever, thanks to mixes utility with rugged sportiness. We like every inch of this truck. Unlike the previous generation, the new Tacoma is more dominant on the front, featuring refreshed grille and the same attractive headlights.

As we can see, the upcoming model also looks slightly taller compared to the outgoing model, and it features completely new wheels. Interestingly, it will ride on an all-new platform shared with the full-size Tundra from our information. Proportionally, the Toyota Tacoma is positioned beneath the full-size Tundra and alongside competitors like the Ford Ranger and Chevrolet Colorado.

On the inside, the 2023 Toyota Tacoma TRD Pro will be no less attractive than the previous generation. It seems that Toyota will make some changes, making this edition more comfortable. As before, the same seating layout remains, and we can expect the TRD Pro model to offer rooms for five passengers. In general, on the rear bench, there is enough legroom and headroom for adults. The latest Tacoma provides 42.9 inches of legroom and 57.2 inches of hip room.

On the technology side, the TRD Pro will feature all amenities that you can find in the regular truck’s upper trims. That means we can expect a 14.0-inch infotainment system that supports Android Auto, Apple CarPlay, and WiFi hotspot.

As mentioned, the new Toyota Tacoma TRD Pro will arrive alongside the Trail Edition. From the available information, both Tacomas will use the same 3.5-liter V6 engine that should produce 278 horses and 265 pound-feet of torque. As you can see, this engine is potent and is hooked with a six-speed automatic transmission.

On the other hand, we like an option that allows you to choose a six-speed manual gearbox. Thanks to the engine above, both models can tow up to 6400 pounds.

When Can We Expect the New Toyota Tacoma TRD Pro?

The 2023 Toyota Tacoma TRD Pro and Trail Edition will be available to purchase sometime next year. Both models are offered in only 4×4 Double Cab configurations, and they’ll hit markets refreshed. Pricing will slightly increase over the 2021 models.

According to many reports, we expect the 2023 Toyota Tacoma TRD Pro to start at $45,500, while Trail Edition should cost slightly less, around $35,200. As we stated, the new Tacoma TRD Pro will arrive somewhat taller than before and with new wheels. On the other hand, the lesser Trail Edition model gains a slightly altered appearance and fresh Lunar Rock paint.