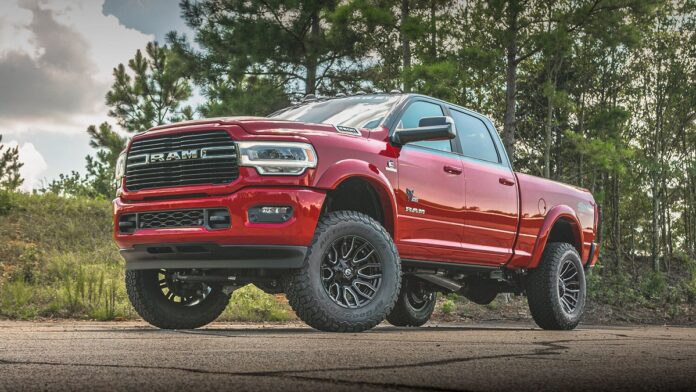 The 2023 Ram HD is reportedly coming next year, and we can expect some minor revisions. If you didn’t know, the Ram HD trucks are the best-in-class for many things. Interestingly, no closest opponents in the heavy-duty trucks class can match the ride quality and luxury that this truck offers.

The lineup starts with the Ram 2500, and it ends with Ram 3500 model. Both models come with a robust design, while Ram 3500 is a king with a towing capacity of up to 37,100 pounds. You’ll find many high-tech on the inside and the new enormous touchscreen infotainment system taken from the lighter Ram 1500 model.

The new 2023 Ram HD is a pickup truck that looks robust and modern. In general, it looks no less attractive than the lighter Ram 1500. Thanks to directional LED headlights flanked to a split grille, the Ram HD dominates on the front. Ram confirms that there will be a few different trim levels with different grilles.

For example, the Power Wagon, one of the favorite models, will get a unique grille and a few extra styling cues. As before, the Ram 2500 comes exclusively with a single-rear-wheel layout, while the stronger Ram 3500 is available with single rear wheels or arrangement also called “dually.”

As we said at the beginning of this post, the new 2023 Ram HD models will receive the same treatment as the half-ton Ram 1500. So, we can expect both trucks to come with high-quality interior materials, plenty of room, and many in-cabin tech features.

As before, Ram will offer HD models with a single cab, four-door Crew Cab, and the massive Mega Cab. Fan fact, compared to rivals from Ford, Chevy, and GMC, the latest Ram HD has the most handsome interior in the class. This model features plenty of high-tech, like a 12.0-inch touchscreen, navigation, a Wi-Fi hotspot, Apple CarPlay, and Android Auto.

The forthcoming 2023 Ram HD is the truck that is offered with three engines. The standard powertrain is a potent 6.4-liter V8, delivering 410-hp and 429 lb-ft of torque. Like before, the engine is hooked with an eight-speed automatic transmission and four-wheel drive.

Besides this engine, the manufacturer also offers a 6.7-liter Cummins diesel inline-six with either rear or four-wheel drive. The first powertrain powers both 2500 and 3500 models and can produce 370 horsepower and 850 lb-ft of torque. The next engine is only available optionally with the 3500 model. Unlike the first one, this one makes 400-hp and an incredible 1075 lb-ft of torque. Both diesel inline-six units are connected to a six-speed automatic transmission.

The forthcoming 2023 Ram HD will reportedly debut in the first quarter of the next year. As we mentioned, the new truck will receive a minor exterior overhaul and a more comfortable interior. We also expect it to come with the same infotainment available on the lighter Ram 1500 models.