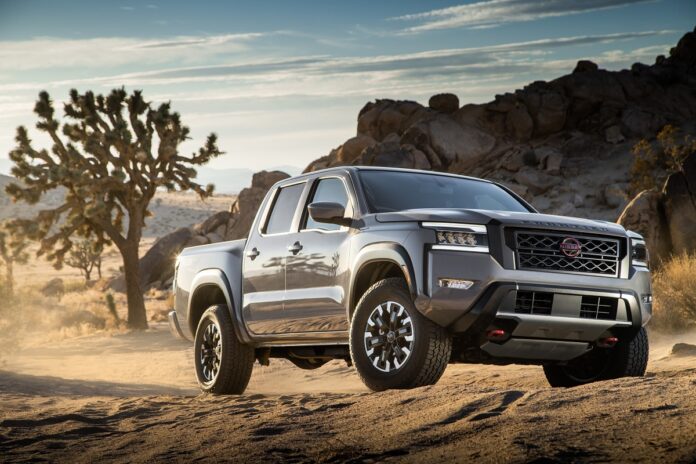 After a decade and a half, Nissan finally unveiled its third-generation Frontier. The new 2023 Nissan Frontier looks handsome, and it should introduce many upgrades. Reportedly, it will arrive next year, featuring the same frame that dates back to the early 2000s.

According to Nissan, the forthcoming Frontier will also get a revised suspension, which is considerably improved over the previous one. Besides, the cabin looks more modern, thanks to quality materials. As for the engine, the new Frontier will use a potent 310-hp V-6 that comes with a nine-speed automatic transmission and rear or four-wheel drive.

The design of the 2023 Nissan Frontier is entirely new. This midsize pickup is one most powerful and, arguably, the best-looking pickup truck in the class. It features a new body inspired by the classic Nissan Hardbody Desert Runner.

The front of this truck is the most eye-catching, deploying a massive grille contoured by attractive headlights and a standard skid plate. Combined with high fenders, the new truck looks off-road ready, especially when it wears big tires. We also heard that it would continue to ride on the same platform as its predecessor, so don’t expect a hybrid powertrain at all. Moreover, the Pro-X and Pro-4X trims are the favorites, and they add Bilstein shocks, LED headlights and fog lights, fender flares, and unique 17-inch wheels wrapped in all-terrain tires.

Inside, the new 2023 Nissan Frontier looks fresh, and it will introduce significant improvement over the previous generation. Unlike before, it offers more quality and better techs. Definitively, the highlight inside is the new instrument cluster and a large 8.0-inch touchscreen that comes standard.

However, upper trims comes with a larger 9.0 display. On top of that, there are many standard connectivity features such as Apple CarPlay and Android Auto integration, several charging outlets, on which one is a USB-C port. The Frontier can also be upgraded with a more powerful sound system of nine-speaker Fender. Besides, the driver-assistance technology is much better and it includes automatic high-beams, automated emergency braking, and class-exclusive rear automated emergency braking.

According to Nissan, the upcoming 2023 Frontier inherits the naturally aspirated 3.8-liter V-6 that generates 310 horsepower and 281 pound-feet of torque. This engine is available with a nine-speed automatic transmission.

Also, it comes standard with rear-wheel-drive, while four-wheel drive is optional. The manufacturer tested this powertrain and revealed that the Frontier’s towing capacity tops 6720 pounds. The same figures are available on th e previous generation as well. However, it still falls short of rivals such the Chevy Colorado, GMC Canyon, and Jeep Gladiator.

How Much Will the 2023 Nissan Frontier Cost?

The debut of the 2023 Nissan Frontier will probably happen next year. Most likely that it will arrive before summer. Official images are available and the new truck looks fresh, featuring many upgrades.

The front fascia dominates, and we think this model is finally ready to take out its opponents. The closest rivals are Chevy Colorado, GMC Canyon, and Jeep Gladiator. Pricing is not yet available unfortunately, while many websites listed that it will cost no less than $28,000 for the base model.

2024 Nissan Titan XD to Introduce a Variety of Upgrades

2024 Nissan Titan Could Be the Last Model Made

2024 Nissan Frontier Could Get Some Modest Upgrades Next Year