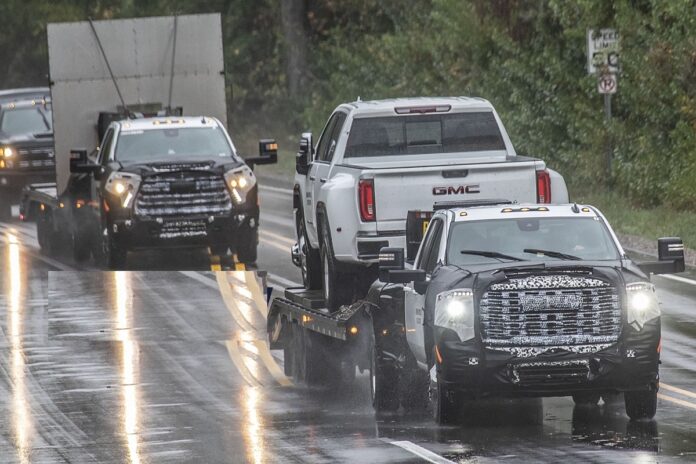 The upcoming 2023 GMC Sierra Denali HD has finally been spied testing with less camouflage. As we can now see, the latest edition is wearing a new grille, wider headlights, and the new daylights with LED strip.

The new look appears to share many similarities with the fully refreshed 2022 GMC Sierra 1500, which will arrive later this week on Thursday, October 21st. If you didn’t know, the Silverado HD’s corporate cousin, the Sierra HD, is one of the most recognized and most robust trucks on the market. For 2023, the manufacturer will also make some modifications under the hood, and we should expect a power boost.

The new 2023 GMC Sierra Denali HD will receive a couple of upgrades over previous generations. The spied model is Sierra 3500 according to its body. It features a rocking dual-rear-wheel configuration, providing great towing capacity. It can pull another GMC Sierra 3500HD dually on its trailer.

Upfront, the new truck incorporates a revised front fascia and the same simplified designed grille. However, unlike before, the grille now sports a flat bottom familiar horizontal slats, deleting the current model’s tab-like lower corners. We also noticed some changes at the back, like revised taillights, a wider bumper, and the same exhaust system as before.

Inside, the 2023 GMC Sierra Denali HD will probably receive some upgrades to keep up with rivals like Ford and Ram. We heard many gossips, and one of the latest ones is that the HD model will get the same treatment as the lighter 1500 model. In general, the Sierra is a truck that’s known for its design and quality of materials. However, it still cannot match the upmarket models from the Ram Ford models.

As mentioned, the manufacturer will make the new 2023 GMC Sierra Denali HD truck more powerful. Reportedly, the heavy-duty 6.6 liters V8 L5P turbodiesel Duramax engine will now produce 505 horsepower and 1,085 pound-feet of torque. This unit will be hooked with the GM 10-speed automatic transmission.

Compared to the outgoing model, this is a sizable improvement from 445 horsepower and 910 pound-feet of torque. Besides this engine, the manufacturer will also offer a naturally aspirated gasoline 6.6L V8 L8T engine that will ditch the current six-speed automatic transmission.

To keep up with other trucks in the segment, the manufacturer redesigned the 2023 Sierra Denali HD model. As we already stated, the forthcoming truck is spied testing wearing a more attractive design, especially on the front end. This model has a more attractive grille, wider headlights, and new daylight with an LED strip.

We expect the new truck to arrive sometime year, probably in the second half. However, the debut and launch timeframe could still be subject to delays due to the ongoing microchip shortage and Covid-19 restrictions.