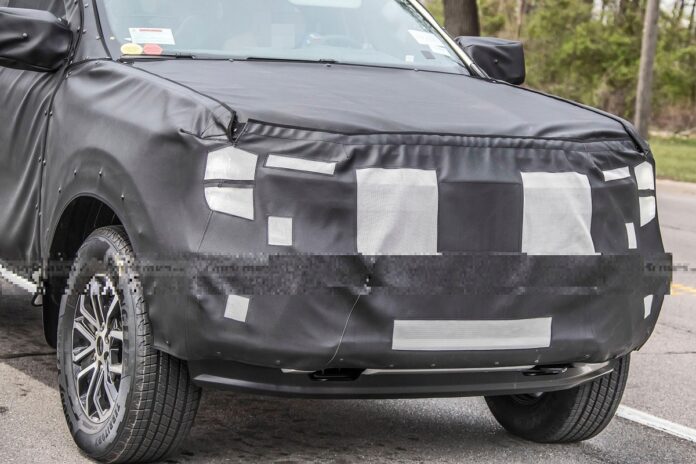 The upcoming 2023 Ford Ranger has been spied testing recently alongside the current Tremor model. Obviously, Ford is attacking the mid-truck segment on all fronts. They announced a few big invents for this year, like the new compact truck Maverick, as the all-electric F-150 Lightning.

Speaking of the Ford Ranger, spy photographers have snapped a prototype undergoing testing in Michigan. The upcoming model looks fresh and is, unfortunately, wearing heavy camo. However, we noticed a few changes, mainly on the front fascia. Actually, the Ranger remains the most rugged truck that will ride on an upgraded version of the T6 platform like the Bronco.

The spied 2023 Ford Ranger is less disguised than before. Thanks to that, it gives us a pretty good look at the front end. First thing first, we noticed that the new Ranger would follow the same footsteps as the F-150. It features an almost identical prominent grille that is flanked by vertical headlights and LED daytime running lights.

Also, the spy shots reveal that the upcoming truck has a ‘sweeper-style’ rear suspension similar to what the company used on F-150 Raptor. Moreover, because of that, we expect the next Ranger to be more off-road oriented. Besides similarly rugged styling, the prototype is equipped with a new 255/65 R18 Goodyear Wrangler Territory tires. The Tremor that is spied alongside, on the other hand, has 265/70 R17 General Grabber rubber.

In the cabin section, the 2023 Ford Ranger will most than likely remain unchanged. Like before, the best option is a 5-seater Ranger SuperCrew model. This variant has more rear legroom and proper rear doors for easy entry and exits.

The new midsize pickup truck comes in XL, XLT and Lariat trim levels. Our recommendation is to jump over base XL trim to an optional STX package that adds more nicer cabin materials. This model also comes with an 8-inch infotainment touchscreen and Apple CarPlay/Android Auto smartphone integration. If you consider going for the mid-level Ranger XLT, expect a Co-Pilot360 safety system with blind-spot monitoring, trailer-tow monitoring, lane-keeping assistance, front/rear parking sensors, Wi-Fi, and much more. At the top of the Ranger, the lineup is the Lariat trim. This package includes leather upholstery, heated/power-adjustable front seats, push-button start, and so on.

Ford didn’t reveal any details about the engine of the 2023 Ford Ranger. However, considering that the new model will ride on an upgraded version of the T6 platform like the Bronco, we expect both models to share some of engine options as well.

Ford has previously suggested that the next-generation 2023 Ranger will debut early next year. As mentioned, the upcoming model is spied testing alongside the current Ranger Tremor. Both models side by side have a similar appearance, but the camouflaged prototype appears to have more muscular bodywork.

So, we assume that the new truck will cost slightly higher than before. The current entry-level model starts at $26,015, while Ranger Lariat SuperCrew 4×4 can exceed $46,000. The starting price is in line with the Toyota Tacoma, Chevrolet Colorado, GMC Canyon, and the redesigned Nissan Frontier.