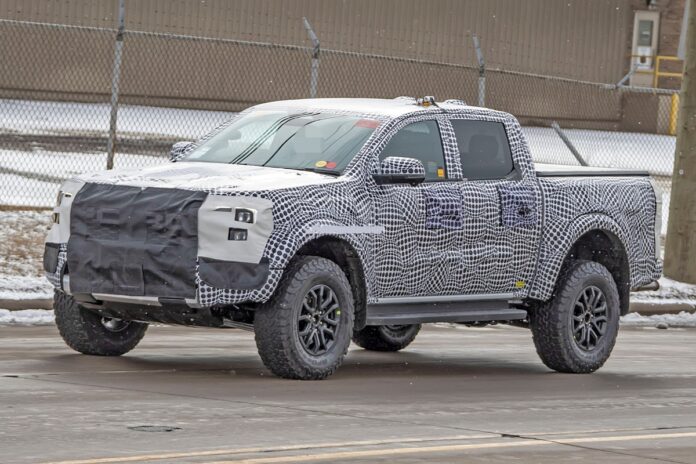 The spy photos of the redesigned 2023 Ford Ranger Raptor just came out. As its big brother, the Ford F-150 Raptor, the off-road-ready Ranger will also gain the same treatment. For 2023, Blue Oval made some changes adding wider flared fenders, rugged tires, extra ground clearance, and a more attractive grille.

Although, as you probably know, the new Raptor rides on the same frame as the regular Ranger, but it offers long-travel suspension and a more powerful engine. As the previous model, the new one will only be offered as a crew cab with a five-foot cargo box. The interior should also be more modern, featuring the updated infotainment system.

The spy shots of the new 2023 Ford Ranger Raptor reveal some changes. Downsized version of the high-flying F-150 Raptor looks almost identical thanks to the same treatment that is used.

The forthcoming pickup truck looks attractive, and it features more sporty styling than the standard one. The changes for the 2023 model are noticeable thanks to wider flared fenders, rugged tires, and extra ground clearance. Like the previous model, the attractive grille is present, featuring a big lettering “FORD” in the middle. Also, the next Ranger will probably be only offered in one body style, a crew cab connected to a five-foot cargo box.

Inside, the 2023 Ford Ranger Raptor more quality materials compared to its predecessor. Moreover, it will be mildly different from its regular counterpart. Unlike before, Blue Oval will replace hard plastics and some rubberized materials with exclusive content. The off-road-ready pickup truck boasts leather and microsuede upholstery and heavily bolstered front seats.

Besides, we anticipate it’ll offer the same set of standard and optional features as the standard truck. That means it will include an 8.0-inch touchscreen with Ford’s latest Sync infotainment software, dual-zone automatic climate control, heated front seats, remote start, and so on. As we mentioned, the crew-cab body style offers a spacious cabin that can comfortably fit five passengers.

One of the biggest questions is what engine will be under the hood of the newest 2023 Ford Ranger Raptor? According to many reports, the upcoming pickup truck could inherit a twin-turbo 2.7-liter V-6 that powers a full-size Ford Bronco SUV.

The Bronco with this engine produces 310 horsepower and 400 pound-feet of torque. On top of that, power is shuttled to all four wheels through a 10-speed automatic transmission. Compared to SUV variant, the Raptor will come with a sturdier suspension and beefier off-road equipment.

The latest 2023 Ford Ranger Raptor will presumably go on sale sometime next year, but Ford hasn’t said how much it would cost. Moreover, we expect it to be close to a top-of-the-line Ranger Lariat. That means it could be priced at around $40,000.

However, many details about the forthcoming truck are still unclear but expect more details in the coming months. When released, the new Ford Ranger Raptor will align with competitors such as the Chevy Silverado ZR2 and the Toyota Tacoma TRD Pro.