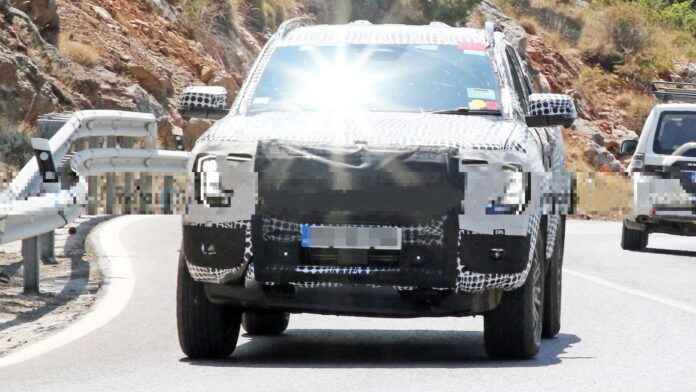 The new 2023 Ford Ranger PHEV prototype has been spied on the street, featuring the same look as the regular model. However, the spied truck is camouflaged heavily, and it’s hard to see what exactly is changed. In general, we noticed the new truck is proportionally the same as the regular one, featuring identical front fascia.

Blue Oval recently confirmed that every new model sold in Europe would offer a plug-in hybrid option by 2024. We’ve also heard that the new truck will combine a turbocharged 2.3-liter four-cylinder gasoline engine with a single electric motor. Thanks to this setup, the Ranger PHEV will produce a combined 362 horsepower (270 kilowatts) and 502 pound-feet (680 Newton-meters) of torque.

Proportionally, the new 2023 Ford Ranger PHEV looks the same as the regular model. As for styling, it reminds us a little of the Ford Maverick model. Overall, the new Ranger should also have a more distinctive face, and as we can see, it will keep the shape of the same headlights as the regular variant.

The upgraded suspension components are also present underneath the camo, and many believe that spied truck is an FX4 variant or some other off-road-focused trim such as a Tremor. As for the platform, the Ford Ranger PHEV will be most likely to use the new one as well as the upcoming Everest model.

The cabin of the forthcoming 2023 Ford Ranger PHEV model is expected to be more modern and comfortable compared to the regular variant. Unfortunately, at this point, there are a few exterior images, but neither inside. From what we heard, the manufacture will probably make the cabin more pleasant, adding more quality materials and technology.

We also can expect the new infotainment system and the same package of standard equipment. The current base XL model includes an 8.0-inch touchscreen with Apple CarPlay/ Android Auto capability, SiriusXM satellite radio four-speaker AM/FM audio system, and a Wi-Fi hotspot that can connect up to 10 devices.

According to many websites, the forthcoming 2023 Ford Ranger PHEV will come with a plug-in hybrid system that hasn’t been used before on any model in the Ford`s line. The engine could combine a turbocharged 2.3-liter gasoline with an electric motor. This setup will provide around 362 horsepower (270 kilowatts) and a meaty 680 Newton-meters (502 pound-feet) of torque.

Our sources say the new 2023 Ford Ranger EV will debut sometime early next year. At the same time as the Ford Ranger EV arrives, we can also expect the Ford F-150 Lightning model. As we mentioned, the upcoming truck has been spied testing recently, featuring a camouflaged body.

Interestingly, Ford announced plans to electrify its entire portfolio in Europe by 2024. Pricing is still a mystery, but we should expect more information in the coming months.