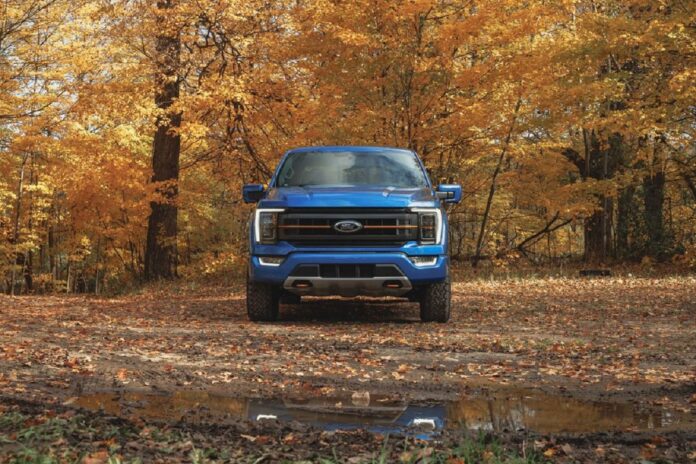 Based on recent news, the forthcoming 2023 Ford F-150 Tremor will bring some novelties this year. The new truck will stand out compared to other F-150 models thanks to its own Trail-focused driver assists and unique interior. It also comes with Trail Turn Assist, resulting in better maneuverability than the regular F-150.

Like the Ford flagship Raptor model, the Tremor is very quick thanks to the 400-hp twin-turbo 3.5-liter V-6 that comes with 10-speed automatic transmission. On top of that, it borrows some themes from the Raptor, including the same vented hood, powder-coated running boards, and a silver bumper bash plate.

The 2023 Ford F-150 Tremor is a great alternative if you’re looking for a robust off-roader. Thanks to its unique styling kit, the F-150 Tremor will separate from other F-150 models. However, like the Raptor model, the Tremor will come with a similar attractive design.

This model basically shares the same vented hood with Raptor, as well as the powder-coated running boards and a silver bumper bash plate. It also sports orange trim across the exterior to match the Ranger and Expedition Timberline models. Four-wheel drive is standard, and Tremor comes with a locking rear differential and 33-inch off-road tires, riding on stylish 18-inch aluminum wheels.

The stylish 2023 Ford F-150 Tremor is offered only in the SuperCrew body style with the 5.5-foot bed. It’s also available in three different trim levels: base, Mid, and High. The Mid trim is recommended because it includes niceties such as heated front seats, trail-driving assist features, an 8.0-inch instrument cluster display, and a great Bang & Olufsen stereo system.

Under the hood, the new 2023 Ford F-150 Tremor will be powered by the same engine we saw on the Raptor variant. That means it will use a powerful twin-turbo 3.5-liter V6 engine capable of producing 400 horses. The powertrain is connected to a 10-speed automatic transmission.

Thanks to twin-turbo engine, the Tremor snaps off a 5.3-second run to 60 mph. Compared to Ford F-150 Raptor, the Tremor is only 0.1 second behind. However, the Tremor crosses a quarter-mile in 13.9 seconds at 100 mph, which is around 2 mph faster than the Raptor model and 1 mph slower than the F150 Hybrid variant. Besides, the Tremor has an additional 445 pounds of payload and 2700 pounds of towing capacity compared to the Raptor.

The forthcoming Ford F-150 Tremor is one of the most favorite trim after the Raptor one. This truck looks robust, and it shares many Raptor elements for an affordable price. With the starting price of $51,000, the Tremor is accessible to a broader range of buyers.

In general, the Tremor model isn’t a truck that can mimic Raptor version, but it still handles well on rock crawling, hill climbing, and mud flinging. As for the release date, the new modern truck will hit the dealerships later this year.