Home Ford 2023 Ford F-150 Raptor: Everything You Need to Know Before Buying One 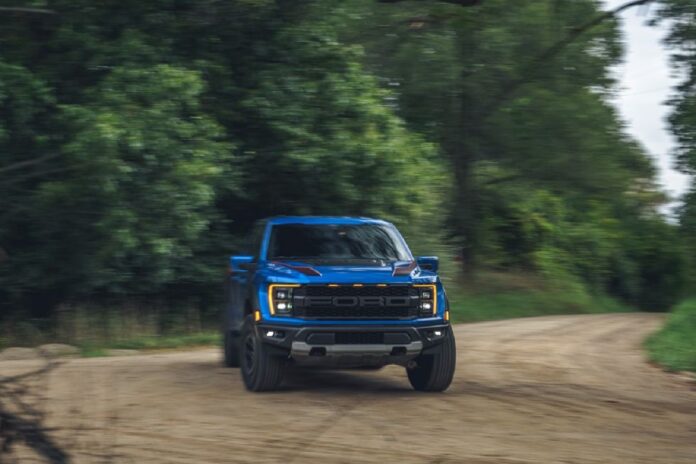 The new 2023 Ford F-150 Raptor is an upcoming pickup truck that is based on the regular F-150 model. In general, the Raptor variant is on steroids compared to the model on which it is based. It comes with a much bulkier body and with a chassis that’s enhanced to tackle easily all types of terrains.

Unlike the original F-150, the Raptor model is powered by a twin-turbo V6 powertrain that’s capable of producing 450 horsepower. Still, that’s not enough power to compete with the current Ram TRX’s 702-hp supercharged V8, but similar power will provide the forthcoming Raptor R model. The interior of the Raptor model will be surely sportier, but it’s not as luxurious as the TRX, which is filled with more upscale features.

On the cosmetic front, Ford doesn’t make any major changes to the 2023 F-150 Raptor model. So, we’re expecting to see the same rugged design with some here and there upgrades. As the outgoing model, the new pickup will only be offered with a crew-cab body style called SuperCrew.

Indeed, there is a variety of individual packages, and you can get more aggressive R variants. This model has been spied recently, and it doesn’t look significantly different from the standard Raptor. Based on spy shots, the forthcoming truck will come with a new hood and with some revisions to the rear fenders. It will also get a revised grille, which is reportedly part of the upgrades too.

The cabin of the 2023 Ford F-150 Raptor will keep the same design layout, with enough room for five. As we mentioned, this model will be available only with a crew-cab body style, which is called SuperCrew.

Unlike the original version, the high-performance model will look sportier inside, thanks to a 12.0-inch digital gauge cluster as well as a huge 12.0-inch touchscreen. It also boasts more interior storage space, nicer materials, and it features wireless Apple CarPlay, and Android Auto. Along with better techs, the Raptor model is available with a more aggressively bolstered Recaro front buckets.

Beneath the hood, the new Ford F-150 Raptor will be powered by the same engine as its predecessor. This truck is available with Ford’s 450-hp twin-turbo 3.5-liter EcoBoost V6 engine.

Moreover, like the model before, the new one will come with a paddle-shifted 10-speed automatic transmission that feeds all four wheels. If that’s not enough for you, Ford plans to release Raptor R variant that could inherit the Shelby GT500’s 760-hp supercharged V8.

The new 2023 Ford F-150 Raptor, despite small changes and updates, will definitely cost slightly more than before. Based on some news, it will start at $68,000, which is an increase of around $1000.

Besides standard Raptor model, Blue Oval will also introduce the Ram TRX killer, the Raptor R. From information that we got, the R model will start at $75,000, which is pretty much more than the original one. Both models will arrive later in the year, while sales should start soon after.