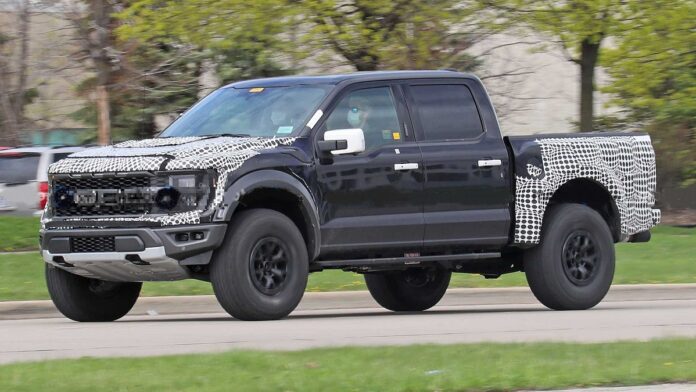 We don’t expect much difference between the regular Raptor and the R variant in terms of design. There are some spy shots available, and judging by them, the Raptor R doesn’t look significantly different at all. First of all, the updated model comes with a five-link rear suspension, long trailing arms, and a Panhard rod. Thanks to that, it can handle bumps much easier than the regular model. It also features Fox shocks with 3.1-inch bodies and 24-inch coil springs.

According to Blue Oval, the layout offers 14.0 inches of suspension travel in the front and 15.0 inches at the back. Unlike the regular Raptor, the R edition has a slightly different look thanks to a much bulkier hood, fascia, and slightly revised tailgate.

Inside, the new Ford F-150 Raptor R will be more sporty than the base model. Noting less, it will be roomy and modern, featuring orange accents from Mustang Shelby GT500. It will also come with the same carbon-fiber trim and sourced paddle shifters.

On the technology side, we think that the high-performance Raptor will also come with a new infotainment system and with much more supportive seats. Other features that will be as standard includes Sync4 connectivity, Wireless Apple CarPlay/Android Auto, and CoPilot360 Ford’s safety suite.

The upcoming 2023 Ford F-150 Raptor R high-performance truck will likely use the same engine under the hood of the Mustang Shelby GT500. As you probably know, this powertrain is one of the most powerful in the class, and it produces 760 hp (567 kW). However, under the new R edition, it might make even more.

It will have around 725 hp (540 kW) to 750 hp (560 kW) from many reports. Compared to the regular model, the R one will also get other mechanical upgrades, such as the updated suspension and larger trailing arms. The current Raptor uses a 3.5L Twin-Turbo V6 Gasoline engine capable of producing 450 hp and 510 lb-ft of torque, which is far away from the Ram’s TRX’s 700 horses.

The high-performance 2023 Ford F-150 Raptor R is the new truck that will look much more aggressive than the base Raptor. Unfortunately, there is still much missing information,  and we are hoping for more news soon. As mentioned, the new model won’t enter production until later In 2022.

Pricing is unavailable right now, but we expect R edition to be a couple of thousands more than the regular Raptor. The current Raptor starts at less than $60,000, featuring a less powerful engine.