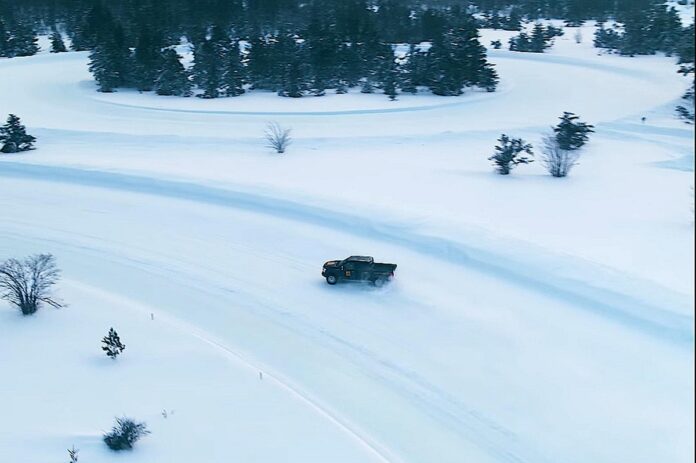 Blue Oval recently reveals that a long awaited Ford F-150 Electric version has been delayed for the middle of 2022. Interestingly, that’s almost the same date as we can expect rivals such as the GMC Hummer EV, the Rivian R1T, and the Tesla Cybertruck. From many media reports, the upcoming model may be called 2023 Ford F-150 Electric or named E-150.

Eider way, the new pickup truck is caught testing recently on the snowy roads, and we must admit, it looks almost identical to the regular F-150. It features the same design language that we saw on F-150 and F-250 models. However, a final version may bring some new elements and styling that will separate the electric version from the rest of models.

The new 2023 Ford F-150 EV looks just like the gasoline and diesel powered versions. However, the caught model reveals some small changes, including a full-width light bar across the front fascia. As we expected, the EV model features a closed-off grille, a reworked lower fascia, and the same headlights as the regular F-150. However, the latest reports indicate that the EV final version will gain more modifications.

Interestingly, one spy shot reveals that F-150 Electric is riding on an independent rear suspension, ditching the traditional live axle. Almost everything else, including a rear and side profile, remain the same. On the back, the forthcoming Electric pickup truck comes with the same positioned LED taillights and bumper.

We don’t know much about the interior of the upcoming 2023 Ford F-150 EV. However, many media news posting that we can expect a modern cabin that will most likely borrow many amenities from the standard F-150. That means we should expect the same seating layout and maybe the same 12-inch touchscreen infotainment system with the latest Sync 4 automaker’s technology.

At this point, there are no available specs about the engine of the 2023 Ford F-150 EV. Blue Oval stated that it would be the most powerful F-150 to date. It will most likely feature dual electric motors that will deliver outstanding horsepower and torque. The F-150 will compete with the Cybertruck that uses a tri-motor AWD setup providing a fantastic single charge 500 miles range. Tesla also stated that this steel truck could go from 0-60 mph in 2.9 seconds. Perhaps the most closes rival to the Ford F-150 EV model is the GMC Hummer that pumps out 1,000 horsepower and “11,500” pound-feet of torque.

The 2023 Ford F-150 EV will arrive next year. From the latest Blue Ovals statement, the forthcoming truck will arrive in the middle of 2022. Pricing is not yet available, but we should expect more official news in the coming months. Interestingly, the middle of 2022 is time when we can expect models like GMC Hummer, Rivian R1T, and the Tesla Cybertruck.

2022 GMC Syclone Thanks to a Supercharged V8 Generates 750 Horsepower