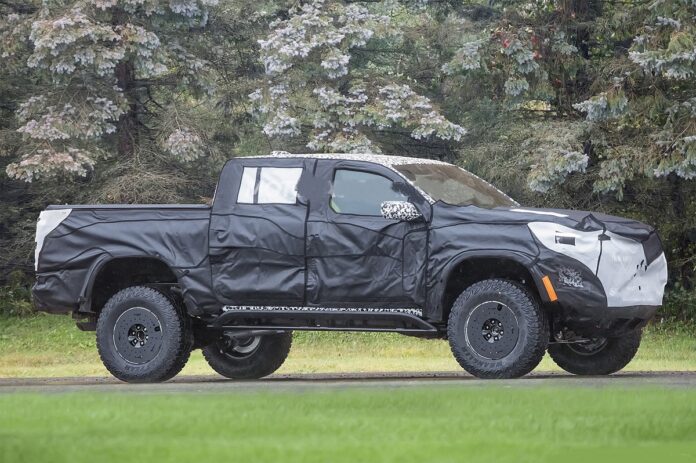 The upcoming 2023 Chevy Colorado ZR2 prototype has been spotted testing, featuring many upgrades and changes. The new off-road variant will reportedly appear in the market in 2022 as a 2023 model. Judging from the first spy shots, the off-road-focused variant will come with high ground clearance and Goodyear Wrangler MT tires. It’s running on the new 33-inch tires versus the 31-inch set on the current Colorado ZR2.

The manufacturer will also add Multimatic’s DSSV shocks developed exclusively for this truck and sporty-tuned DSSV shocks. Thanks to that, the Colorado ZR2 will provide better ride and handling on or off the road.

The 2023 Chevy Colorado ZR2 exterior will get some upgrades here and there. However, it will keep the same attractive lines on which this truck is recognized. Unlike the regular model, the ZR2 comes with a specially made suspension setup, off-road dumpers, and a 2.5-inch greater ground clearance.

In terms of styling, the Colorado ZR2 receives a new face distinct from the rest of the models. The black plastic can be seen on the grille and the front bumper, giving the vehicle an off-road appearance that it deserves. Other visible uniqueness includes red tow hooks and attractive 17-wheels.

On the inside, the 2023 Chevy Colorado ZR2 will not differ too much from the typical Colorado cabin. The layout is the same and is more practical than beautiful. For 2023 year model, the manufacturer will add more quality materials and most surfaces are softer than before. On the tech side, it’s no surprise that the list of standard features is much longer this time. Genuine leather upholstery is standard, along with power-adjustable seats and a responsive 8-inch touchscreen.

Safety ratings are excellent, and Colorado offers features such as stability control, rearview camera, a trailer-sway assist, and hill-start assist.

In the engine department, things will probably remain the same. This truck will likely be available with two reliable powertrain options. As the base unit, we expect the 2023 Colorado ZR2 to use a 3.6-liter V6 engine capable of producing around 308 hp. Besides this engine, there is also an optional 2.8-liter turbodiesel engine with low-end torque.

This engine will reportedly produce 181 horsepower and 370 lb-ft of torque. As far as we know, Chevy will use the same eight-speed automatic transmission with the gasoline V6. On the other hand, a six-speed gearbox is available as the only option with a diesel engine. Interestingly, both machines are rated to carry 5,000 pounds of towing capacity. However, the turbodiesel variant should provide a slightly better fuel efficiency than the 3.6-liter V6 model. A hybrid option may also be available with a new generation.

The new 2023 Chevy Colorado ZR2 will likely be revealed in the coming months. Because there will be some upgrades and changes, we anticipate that the Colorado ZR2 will cost higher than the current model, around $41,500.

However, the price will significantly increase if you add some options. The upcoming Toyota Tacoma TRD Pro model is the closest competition to this truck.