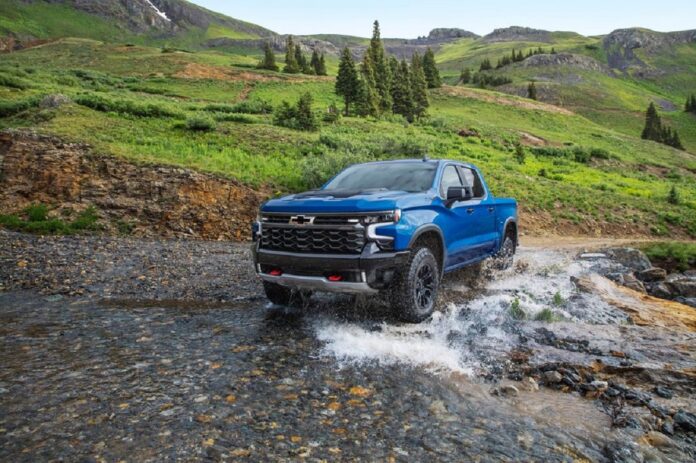 The aggressively-styled 2023 Chevrolet Silverado ZR2 will arrive next year, featuring some fascinating upgrades. As you may know, this isn’t an ordinary half-ton pickup truck. The ZR2 is an off-road beast that has an intimidating appearance.

Unlike the regular Silverado model, this truck features a tricked-out suspension, Multimatic spool-valve dampers derived from Formula 1, and one of the sporty cabins in the segment. It also comes in a crew-cab-only body style, and everyone inside can enjoy the ride with maximum comfort. Under the bulging hood, there is a naturally aspirated 6.2-liter V-8 that’s also available in the regular Silverado 1500 model. The engine is powerful, and it delivers 420 horsepower and 460 pound-feet of torque.

The new 2023 Chevy Silverado ZR2 is a stylish truck that’s available in crew-cab-only body style. The aesthetics are more attractive compared to the regular model, and they can change quite drastically depending on how it’s configured. The Silverado ZR2’s proportions remain the same, but it sports a more distinctive front end than before. Unlike its rivals, Ford and Ram TRX models, the ZR2 attractive gaping grille with its hollowed-out bow-tie logo looks. Thanks to that, this truck is capable of both swallowing large air masses and unsuspecting jaywalkers.

We like everything on this truck, starting with LED headlights, taillights, and wheels. Overall, the new ZR2 looks appropriately aggressive and is similar to its wide-bodied little brother, the Colorado ZR2.

Interior Comes With a Slick-Looking Dashboard

Inside, the 2023 Chevrolet Silverado ZR2 is modern with a slick-looking dashboard. Like before, it offers a very roomy cabin with a crew-cab body style. In general, there is enough room to place five passengers. This truck features a 12.3-inch fully digital instrument panel and a massive 13.4-inch touchscreen on the tech side.

The infotainment comes along with wireless Apple CarPlay and Android Auto and is compatible with Amazon Alexa and with Google voice assistance, maps, and an app store. The cabin also includes leather-trimmed seats that are very supportive and sporty dark trim.

Like the regular Silverado 1500 truck, the 2023 Chevrolet ZR2 model is available by the same engine. Beneath the hood, there is a 6.2-liter V-8 capable of producing 420 horsepower and 460 pound-feet of torque. The machine comes with a 10-speed automatic transmission, and it uses a four-wheel-drive system with a two-speed transfer case and electronic-locking front/rear differentials. Moreover, there are also rumors that this engine will be improved mechanically to provide more horses.

With this powerful engine and conventional trailer hitch, the Silverado ZR2 truck can tow up to 8900 pounds. It also can handle a payload of up to 1440 pounds, which is more than enough.

According to many reports, the forthcoming 2023 Chevrolet Silverado ZR2 will likely hit markets in the fall of next year. Chevrolet also confirmed some redesign of the heavy-duty trucks, and we can expect its releases simultaneously.

Pricing is lucky available, and the new ZR2 will starts at $55,000 without options. Moreover, the fully loaded model will probably excess price tag of $80,000.