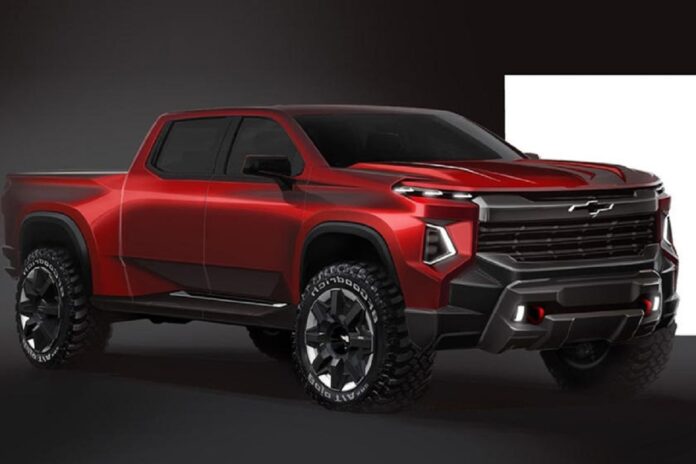 According to multiple reports, the full-size pickup truck 2023 Chevrolet Silverado 1500 will be a fully electric. This truck is in the works, and from early reports, it should provide at least 400-mile range on a single charge. Like the upcoming GMC Hummer EV truck and Ford F-150 Lightning, the Silverado electric variant will ride on the state-of-the-art Ultium platform.

An official launch date will happen next year during General Motors’ big announcement in April. However, expect sales to start soon after. Meanwhile, spy shots are available, and we noticed many upgrades over the regular variant.

The 2023 Chevrolet Silverado 1500 looks more robust than before. As we said, some of the spy shots are available, and they reveal some mild upgrades. Meanwhile, one rendering has just emerged online, and the new Chevrolet Silverado 1500 looks more futuristic than any truck so far. It comes with a completely new front fascia, adopting a massive grille, slimmer headlights, and the attractive shape of the fog lights. Generally speaking, the design reminds us somehow of the Chevy Blazer SUV.

From many reports, this truck will be unchanged dimensionally, and it will be offered with the same setup. That means we can expect a choice of a regular cab, double cab, and crew cab. The regular cab has a box length of 98.18 inches, a double cab with a standard bed of 79.44 inches, and a crew cab with a short bed (69.92 inches).

Chevrolet hasn’t released any cabin image of the upcoming Silverado truck. However, we heard that the manufacturer will refresh cabin, making it more modern. First of all, we can expect the same seating layout that is allowing five passengers. In addition, more comfortable seats are a must, like a better techs.

The current Silverado comes with a touchscreen display, either 7 inches or 8 inches in size. However, we think that the EV variant could feature an even bigger screen. Apple CarPlay and Android Auto integration should be standard, while more amenities can be expected on upper trims.

Given that the 2023 Chevrolet Silverado will share a platform and assembly line with the Hummer EV, it’s highly likely that both trucks will use the same powertrains. That would mean the base model should use one electric motor, while two or three electric motors could be part of higher trims.

The Silverado EV will utilize General Motor’s novel Ultium battery technology with a battery pack of at least 200-kWh. Chevrolet claims that trucks will be able to travel up to 400 miles per charge. Compared to the Ford’s latest F-150 Lightning, this is around 100 miles more.

Chevrolet hasn’t unveiled pricing for the new Silverado 1500 yet, but they will surly in the coming months. As mentioned, the forthcoming model will be all-electric, and there are no clues if this model will also be available with gas engines.

Although it shares its electric powertrain with the GMC Hummer EV, the new Silverado might cost slightly more. Some famous car websites listed that it could start at $50,000, which is 10k more than the Tesla Cybertruck. Meanwhile, we can expect this model to be introduced sometime next year, probably in the second half.