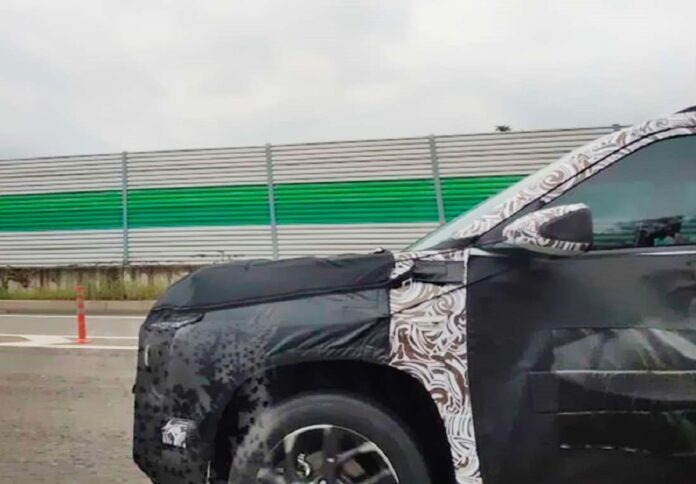 The new compact four-door 2023 Chevrolet Montana will reportedly arrive in the second half of 2022, featuring many changes and upgrades. This truck has been around since 2003, and the third generation could become the market’s most popular truck. Of course, this segment is crowded with many competitors, and we would like to see how the upcoming Montana will keep up with models such as the Ford Maverick, and the Hyundai Santa Cruz.

From information that we got, the forthcoming truck will be based on the popular Blazer model, and it will probably use the same engines. Under the hood of the current Blazer, there’s a choice of two different engines. The standard one uses a 1.2-liter three-cylinder gasoline engine, while an optional one is 1.3-liter unit.

The first spy shots of the upcoming 2023 Chevrolet Montana have just come out, and we have our first look at what this model will look like. First of all, we noticed immediately that Montana wears similar styling as recently introduced Blazer SUV. From some information, the new pickup will share the same platform with the Blazer model.

It will also be the brand’s first compact unibody pickup. The front end of the spied prototype dominates with a massive grille, tiny LED headlights, and a very sporty hood. We also noticed on the bask, the tailgate that will have a conventional opening and the taillights that are identical to those on the Blazer model.

Unfortunately, the upcoming 2023 Chevy Montana is only captured outside, so there’s no available image at this time of its inside. In general, we’re expecting this model to be modern and spacious, just like the Blazer model. It will definitively offer the same seating layout, but some upgrades are expected as well. The seats will be surely more supportive, especially on the upper trims.

The upper models will come with more amenities, and they will offer leather upholstery. However, many believe that the Chevy Montana will come with a new 12.3-inch digital gauge cluster, as well as with a 10.8-inch head-up display.

The new 2023 Chevy Montana will most likely use the same engine options as the Chevy Blazer model. This SUV is currently available with a 1.2-liter three-cylinder gasoline engine producing 137 horsepower. This engine is paired with a CVT gearbox as standard, just as the front-wheel-drive setup.

On the other hand, the manufacturer will also offer an option 1.3-liter unit that makes 154 horsepower. Unlike the base model, this one is connected to a 9-speed automatic transmission.

The new 2023 Chevrolet Montana has been spied testing recently with a covered body. As far as we can see, the manufacturer will make this model more attractive than we thought. As mentioned, the Montana will use unibody architecture, and it will be based on the Chevy Blazer. Actually, it will share many cues and probably the same engines as well.

Right now, there is no exact release date of this truck, but many believe it will probably debut in the second half of 2022. As for the price, we presume that the new Montana will cost approximately $20,000. Moreover, in the same ballpark is the Ford Maverick, while Hyundai Santa Cruz costs much more.