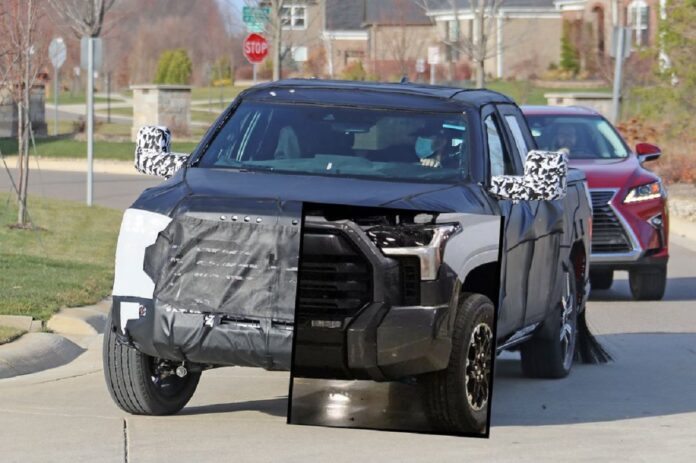 The next-generation 2022 Toyota Tundra should be soon revealed. According to the spy shots, the forthcoming pickup truck looks different than the current model. First of all, the new model has been camouflaged, and we didn’t managed to see most of the changes.

However, some parts are visible, like the new grille and interestingly shaped headlights. Also, the prototype looks to be a crew-cab model with a short bed. Perhaps the most exciting news about the upcoming Tundra is in the engine department. This pickup truck will deploy the new twin-turbo 3.5-liter V-6 that will replace the aging 5.7-liter V-8. On top of that, we should expect at least one hybrid version.

Toyota is ready to show a new version of the full-size pickup truck Tundra. This news has been confirmed by the recently spied prototype on a public road. Basically, the leaked images of the upcoming Tundra reveals a complete overhaul. This is a radical change since this truck was fully redesigned in 2007.

First of all, the new Tundra grows in size and features a more attractive exterior to compete with domestic full-size trucks like Ford Ranger, Chevy Silverado, and Ram 1500. The leaked photos also reveal a new reshaped grille and much bigger headlights. Not much is visible on the back of this pickup, only we know that the spied version is a crew-cab model with a short bed.

The cabin of the 2022 Toyota Tundra will probably be overhaul to match rivals. Overall, we just got some information that confirms that claim. Moreover, as before, the layout will remain the same, and Tundra should be capable of providing a comfortable cabin for up to six passengers.

The entry-level will most likely to host more quality materials and a much bigger touch screen for the infotainment system. On top of that, buyers can expect standard features like Apple CarPlay/Android Auto smartphone integration, Bluetooth, USB port, auxiliary audio input, and a 6-speaker sound system. Toyota’s Safety Sense P system is the most advanced in the market, and we can expect Tundra to feature it.

The 2022 Toyota Tundra will come with some significant changes under the hood. The aging naturally aspirated 5.7-liter V-8 will be most likely replaced with the new twin-turbo 3.5-liter V-6. From some early reports, the new V-6 makes 416 hp and 442 lb-ft of torque. If you didn’t know, this engine is also available in Lexus LS 500 luxury sedan, delivering outstanding performances.

The next engine will probably use a hybrid system to compete with the new F-150 hybrid. However, many pieces of information are still mystery, and we must wait for some time to found out more.

The new version 2022 Toyota Tundra will probably debut in mid-2021. That means we can expect sales to begin by the end of the next year. The new pickup should introduce many improvements over the previous generation. Pricing is still unknown, but from some gossip, the redesigned Tundra will start at $34,000.

More amenities and equipment are part of the upper trims, and one can get it for a reasonable price. However, the current fully-loaded model reaches $55,000, and the new one will probably follow that.