Home Toyota 2022 Toyota Tundra TRD Pro Is on the Way 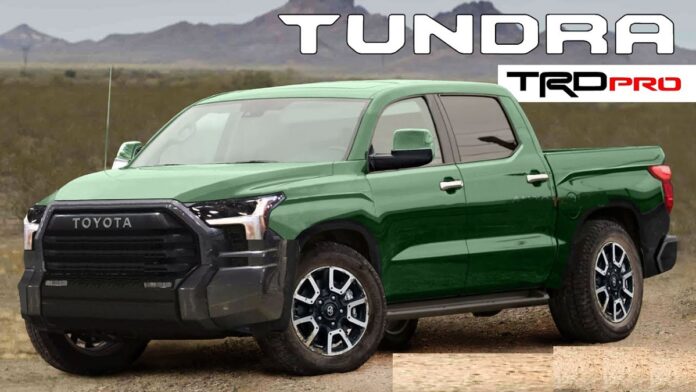 The all-new 2022 Toyota Tundra TRD Pro has been finally confirmed. This high-performance off-road pickup truck is one of the most stronger rivals in the truck segment. Unlike many of the models in its class, it features more equipment, delivering excellent off-road capabilities. On top of that, it looks more robust than the standard model.

However, like the base Tundra, TRD Pro deploys the same engine options. This truck uses a familiar 5.7-liter V8 gasoline unit that generates 380 hp and 430 lb-ft of torque. Reportedly, Toyota will, for the first time, introduce a new hybrid setup that will consist of a 3.5-liter V6 engine paired with an electric motor and battery pack. In addition, expect the hybrid variant to generate at least 450 horsepower. The new Tundra TRD Pro should go on sale in the first quarter of 2022.

The forthcoming Toyota Tundra TRD Pro will depart in many things from the regular model. First of all, this off-road version looks more attractive, and it borrows many styling cues from the popular 4Runner SUV. It features almost the same front fascia that consists of a recognizable trapezoidal grille, c-shaped daytime running lights, and the new LED headlights. Overall, the side profile looks also muscle, thanks to the new off-road wheels. Moreover, Toyota will most likely introduce larger wheels optionally as the tires.

The new TRD Pro pickup comes with a vertical LED taillights and a power tailgate on the back. New colors are also coming, and from what we heard, Toyota could offer Citrus Metallic exterior paint. The same color is present on the latest 4Runner TRD Pro version.

Like the regular Tundra, the new TRD Pro will ride on the same popular F1 platform. Basically, this platform also underpins models such as the Tacoma pickup and the famous Sequoia model. However, the 2022 Toyota Tundra TRD Pro should offer more modern styling and better comfort.

Under the hood, the forthcoming 2022 Toyota Tundra TRD Pro will most likely use the same engine as the regular truck. That means we can once again expect a proven 5.7-liter V8 gasoline unit that generates 380 hp and 430 lb-ft of torque.

However, from many reports, the manufacturer may also introduce a new Lexus’ hybrid setup. Basically, the hybrid system could use a 3.5-liter V6 engine paired with an electric motor and battery pack. Thanks to this combination, we can expect at least an output of 450 horses and an 10-speed automatic transmission.

Toyota will most likely release a new Tundra truck in the first quarter of 2022. Considering that this is the new generation, we can expect a slightly different and higher price.

According to some gossip, the latest 2022 Toyota Tundra TRD Pro will cost around $60,000, which is approximately $27,000 more than the regular version.