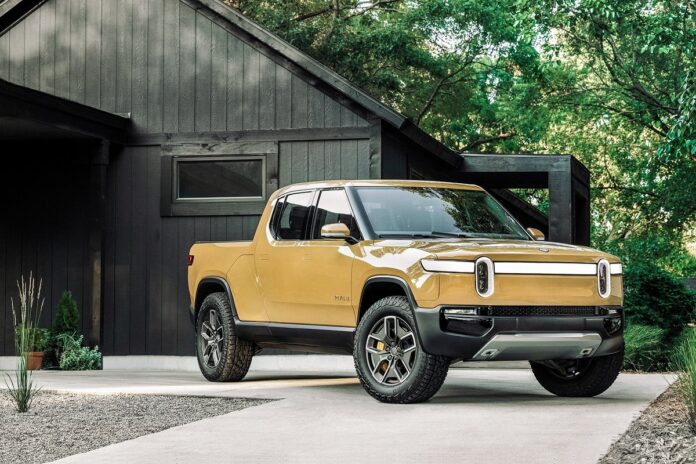 The most exciting news lately is the release of the all-new 2022 Rivian R1T pickup truck. This truck is an all-electric and is aimed to rival the new Tesla Cybertruck and Bollinger models. The upcoming Rivian R1T looks attractive, and it comes with really impressive specs. It comes in the form of a 5-passenger crew cab with a 4.6-footbed. Inside, this futuristic truck looks more like Tesla than Ford, and is highlighted by minimal controls and large screens.

Overall, everything is upscale, and Rivian R1T is crowded with lots of technology. On top of that, this model features four electric motors + battery pack delivering a total output of amazing 750 horses and 829 lb-ft of combined torque.

Unlike the many pickup trucks in the segment, the new 2022 Rivian RT features very futuristic styling. It’s not odd like the Tesla Cybrrtruck, but it’s not eider an ordinary truck. However, Rivian R1T’s total length is 217.1 inches, and it comes with a relatively short bed of just 4.6 feet in size. The front dominates for sure with a pair of “stadium-shaped” lights that convey its cartoonish eyes. The most exciting feature is a horizontal light bar that indicates a charge-level when the electric pickup is charging.

The latest Rivian also features an air suspension that enables a wide range of heights. For the best off-road experience, the Rivian R1T has an incredible 14.1 inches of ground clearance. Just for comparison, the Ford Raptor has only 11.5.

The new 2022 Rivian R1T features a double cab, similar to a traditional double-cab pickup. The interior looks modern, and the cabin can comfortably accommodate five passengers. Interior is highlighted with leather, wood, and large displays. We can also expect Apple CarPlay, Android Auto, and an onboard Wi-Fi hotspot to be standard equipment.

Overall, safety is also one of the best, according to Rivian. Officials confirms that every model will come standard with suite called Driver+. The package includes automated emergency braking, lane-departure warning, adaptive cruise control, and hands-free driver-assistance technology.

The new 2022 Rivian R1T is an all-electric pickup truck that includes four separate motors, one at each wheel, and three battery options. Combined, the engines are rated to generate up to 750 horsepower and 829 lb-ft of torque. Buyers can choose 105 kWh, 135 kWh, and 180 kWh battery capacity. The 105-kWh variant will deliver 230 miles of range from some early testing, while the 135-kWh version around 300 miles per charge. Interestingly, Rivian claims that with the largest battery of 180-kWh, R1T pickup will max range 400 miles.

These are gargantuan numbers, and the R1T can hit 0-60 mph in three seconds. On top of that, Rivian stated that R1T could tow up to 11,000 pounds, which is excellent.

The new 2022 Rivian R1T is the latest electric pickup truck, that will be available to purchase sometime this year. According to Rivian, the base model cost $69,000 and can go up to $100k with the most larger battery and fully equipped. Compared to the main rival Tesla Cybertruck, the Rivian R1T is much more expensive truck.

2023 Rivian R1T Will Start Being Delivered to Customers Next Year