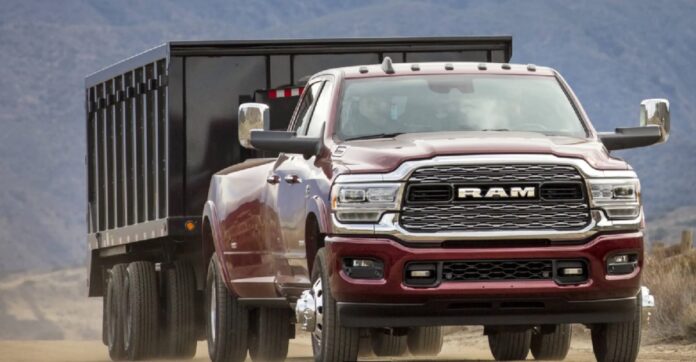 One of the most robust trucks on the market is definitively the new 2022 Ram 3500. Ram recently stated that all lineup of light and heavy trucks it would be redesigned in the following year. So, the new Ram 3500 is ready to introduce more refreshments than ever. It comes with robust construction, and primarily thanks to that, it’s a class king with a 37,100 pounds of towing.

The redesigned version will arrive sometime this year, and we can expect it to deploy the same engines. Ram 3500 is offered with the most potent 6.7-liter Cummins diesel inline-six engine, available in two variants.

The new 2022 Ram 3500 is one of the severe work trucks that looks attractive and robust. This model is recognized by its crisp, modern lines that define the truck’s front end. Like its predecessor, the Ram 3500 continued to wear the same split grille that’s flanked with directional LED headlights.

Moreover, depending on chosen trim level, the grille design will vary. For example, the most favorite Power Wagon has several changes on the front, including a black grille and a vast range of wheels and tires. The Ram 3500 is available as single rear wheels or dual rear wheels (two wheels up front, four wheels at the back). This latter arrangement is also known as “dually.”

For a start, the new 2022 Ram 3500 will continue to be available as a single cab, a spacious four-door Crew Cab, and the massive Mega Cab. Generally, no matter which version you choose, all of them provide comfort and plenty of new amenities compared to the outgoing truck. In addition, Ram has the best interior in the segment with luxury-car-level detailing. It`s extremely comfortable, offering a modern design that can match rivals like Ford, Chevy, and GMC.

Like the lighter Ram 1500, the heavy-duty 3500 also comes with a center console that accommodates a 12.0-inch touchscreen. On top of that, every Ram includes navigation, a subscription-based Wi-Fi hotspot, Apple CarPlay/Android Auto, and five USB ports.

The latest 2022 Ram 3500 is the truck that will remain unchanged in the engine department. This model is being powered by a 6.7-liter Cummins diesel inline-six, available in two variants. The first variant generates 370 horsepower and 850 lb-ft of torque, while the second one makes 400-hp with a fantastic 1075 lb-ft of torque.

Like before, both mills will use a six-speed automatic transmission. All models are available with rear-wheel drive as the default arrangement, while all-wheel drive is optional and standard in the Power Wagon version. Thanks to Cummins diesel engines, Ram 3500 towing capacity is 37,100 pounds, while the maximum payload is 7680 pounds.

The most exciting news is that the 2022 Ram 3500 will receive some improvements. Reportedly, it should feature more robust styling and a comfortable cabin. Ram confirmed that all Ram models would be redesigned this year, including also the Ram 1500 and 2500 models.