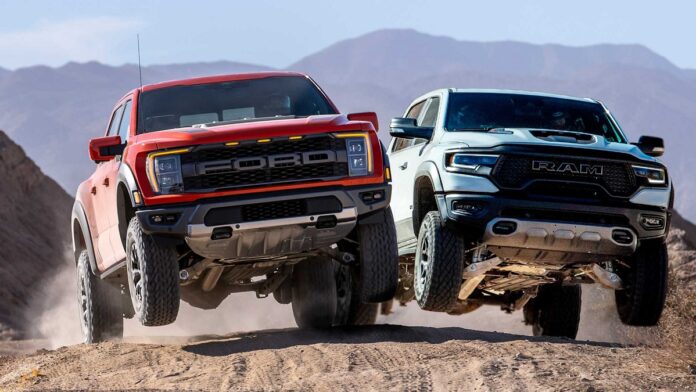 Exciting news, the all-new 2022 Ford F-150 Raptor R is arriving next year. Blue Oval company recently confirmed that it is working on the new higher-performance version of its F-150 Raptor, the Raptor R.

Besides plenty of exterior and interior updates, the new pickup truck is likely to be powered by a new supercharged V-8, delivering more output than most of Raptor’s rivals. If you didn’t know, the same Supercharged V8 powertrain powers a mighty Mustang Shelby GT500, making more than 700 horsepower. That means it might finally dethrone the 702-hp Hellcat-powered Ram 1500 TRX. This news was confirmed by multiple Ford sources online through Twitter.

The upcoming 2022 Ford F-150 Raptor R is Ford’s strongest answer to the Ram’s TRX pickup. The higher-performance Raptor is spied earlier this year, featuring an almost identical design as the non-performance pickup. Blue Oval officially confirms that it will be called the Raptor R.

This pickup will use the same platform as the standard model, with some modifications to place one of the most significant engines on the market. Perhaps the most exciting news is that Raptor’s returned five-link suspension offering better ground clearances on the R model. Thanks to that, the new Raptor R promises excellent traction, stability, and improved ride comfort. On top of that, we can surely expect an impressive array of suspension upgrades and the optional 37-inch tires.

The forthcoming high-performance 2022 Ford F-150 Raptor R will most likely feature the same cabin as the Raptor pickup. Of course, we should expect more sporty elements like seats, better materials, and technology. Moreover, the new Raptor R will probably keep the same layout, considering that dimensionally will be the same as the regular Raptor.

That means there is enough room inside for five occupants. It will come standard with a 12.0-inch digital gauge cluster and with nicer materials. Like the Raptor version, we also expect a standard Sync 4 infotainment system, Amazon Alexa, and wireless Apple CarPlay and Android Auto.

According to some gossips, the new high-performance 2022 Ford F-150 Raptor R, may borrow the engine from the Mustang Shelby GT500. This car uses a 5.2-liter supercharged V8 powertrain that is capable of producing 760 horsepower and 625 pound-feet. If this indeed happens, the Ram TRX will get an actual rival.

However, regular Raptor pickup continues to use the same 3.5-liter twin-turbo EcoBoost producing 450 horsepower and 510 lb. -ft. of torque. This model comes with a fuel and direct-injection (PFDI) system and 10-speed automatic transmission.

Reportedly, the new Ford F-150 Raptor R will arrive sometime next year, according to the officials. Besides more attractive and sporty styling, this edition will most likely be powered by the mighty Supercharged V8 engine.

However, it’s still early to discuss about its price, but many believe that the performance version will cost around $20k more than the Raptor regular model. Eider way, we should expect a great battle between Ford F-150 Raptor R and the most potent pickup Ram TRX.