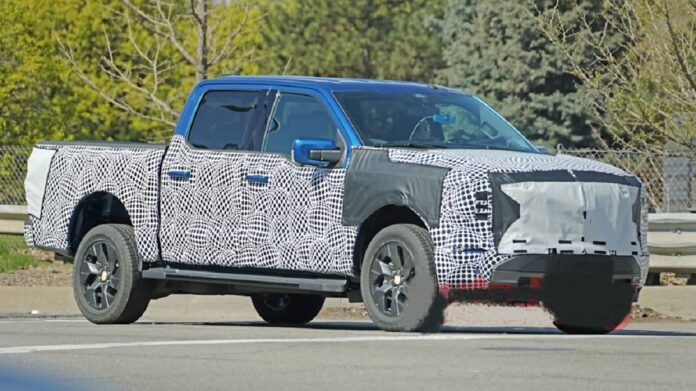 Reportedly, Blue Oval’s upcoming EV model could be called, the 2022 Ford F-150 Lightning. The forthcoming all-electric variant has been long-awaited, and officially, it will arrive next year. However, if you didn’t know, the F-150 Lightning model was trendy in the 90s.

Basically, at that time, this pickup truck was powered by a V8 engine, providing excellent performances. Fun fact is that Ford is planning to use the Lightning nameplate for its upcoming all-electric F-150. The F-150 Lightning reportedly will use a dual-motor setup with a standard all-wheel-drive system. It should also adopt a powerful battery capacity that will provide at least 300 Milles on a single charge. Without further ado, we just got some of the spy shots, and let’s analyze them.

The first spy images of 2022 Ford F-150 Lightning reveals almost identical styling as we used to see on the standard F-150 truck. Generally, it looks still attractive, featuring some here and there updates. The spied prototype was spotted last week in Michigan, wearing heavy camo.

Noticeably, the EV model features some modifications on the front fascia, and it has a closed grille. Generally, on most of the upcoming EV models that we recently saw, the front fascia is closed, because there is no need for extra cooling. Besides, we should also expect higher ground clearance compared to the standard version. Still, the captured prototype is in the early stage of development, and we have no idea which novelties would final product bring.

Inside, the upcoming 2022 Ford F-150 EV will be almost identical to the base F-150. Generally, it will adopt the same spacious cabin that can fit five passengers comfortably. Surly, unlike the standard model, the EV edition will come with a more modern interior that should host plenty of quality materials and lots of new techs.

The half-ton workhorse from the first spy shots is getting a big vertical screen that stretches 15.5 inches, like the one we saw on the Mustang Mach-E. The screen is backed by the Ford latest Sync 4 operating system and interface. Besides, we should also expect more standard features and an excellent package of driver aids.

At this point, Ford hasn’t revealed much information about the 2022 Ford F-150 Lightning powertrain setup. The upcoming pickup truck will most than likely feature a dual-motor system and standard all-wheel-drive system. The whole configuration should offer more than 450 horsepower, and it would accelerate from zero to 60 mph in less than 5.0 seconds.

As we said, we also anticipate the powerful battery pack that will provide at least 300 miles of range. Generally, many believe that the Ford F-150 EV will use the same electric motors and battery as the Mustang Mach-E. This model, according to the latest information, can travel around 305 miles of driving range.

The sales of Ford’s first electric pickup will be most likely to begin sometime in 2022. Many rumors indicate that it will be introduced to the public at the end of this year, while sales should start in the second quarter of 2022. The 2022 Ford F-150 Lightning price isn’t yet available, but expect it to cost no less than the Tesla Cybertruck and GMC Hummer EV models.