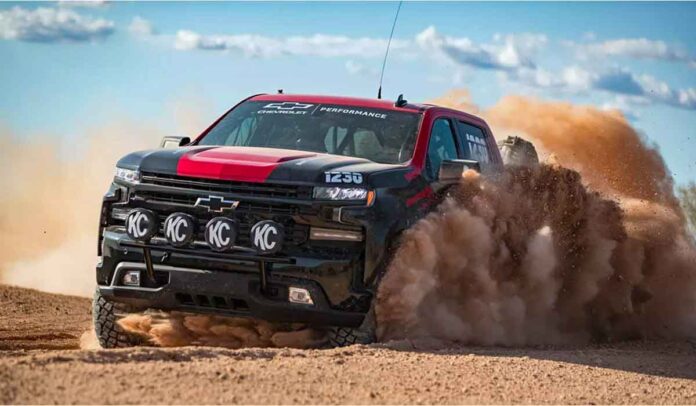 The Ford Raptor’s main rival, 2022 Chevy Silverado ZRX, has been recently spied testing. At first look, the brand’s upcoming truck looks attractive and is almost ready for hardcore off-roading. The biggest change to this truck is visible on the front. Unlike the base model, the Chevy Silverado ZRX features a modified bumper, skid plate, and a much more modern cabin.

Chevy will reportedly also give the new Silverado ZRX a major interior upgrade that includes a heavily revised center stack and advanced infotainment system. On the other hand, the new track will most likely use the same naturally-aspirated 6.2-liter EcoTec V8 capable of producing 420 horses and 460 lb-ft of torque under the hood.

The new 2022 Chevy Silverado ZRX is getting some exterior tweaks compared to the original version. Reportedly, this truck will focus on hardcore off-roading. The biggest changes are visible on the front, and the new ZRX wears a modified bumper without a lower fascia. Under this truck is a skid plate with a small tow bar attached to it.

The Silverado ZRX also rides higher than stock, and it wears all-terrain tires and the Multimatic DSSV dampers. The rear end features attractive bumper and exhausts system that apart it from the Silverado regular truck.

Inside, expect the new 2022 Chevy Silverado ZRX to be more modern than the regular Silverado. Of course, dimensionally, both models are identical, so expect the same seating layout. From the information that we got, Chevy will reportedly give all 2022 Silverado models a major upgrade inside.

The changes will include more high-quality materials, a heavily revised center stack, and a larger infotainment system. More than that, there are some unique touches inside that will separate this model from the base model. The ZRX will get a special seats with stitched logo in the middle and much more amenities. Interestingly, the high-performance truck will host the same safety technology as the Silverado basic truck. It should feature lane-departure warning and lane-keeping assist, adaptive cruise control, and so on.

2022 Chevy Silverado ZRX Under the Hood

The forthcoming 2022 Chevy Silverado ZRX pickup truck will be most likely powered by the same engine as the regular version. This model uses a naturally-aspirated 6.2-liter EcoTec V8 powertrain that is very powerful. However, we don’t have exact information about its output at this point.

The current truck with the same engine is capable of producing 420 horses and 460 lb-ft of torque. Like on the regular version, we should also expect the same GM 10-speed automatic transmission. Also, from some rumors the new ZRX might be offered as well with one more engine option. Meanwhile, the Ram TRX uses a supercharged 6.2-liter V-8 producing an astonishing 702 horsepower.

The new 2022 Chevy Silverado ZRX will most likely arrive sometime this year. After talking about its upgrades over the regular truck, it will probably cost near Ram TRX. That means a price of around $60,000 is most likely.

Moreover, the price will jump higher by adding more options, but it should stick to a range of $80,000. As we mentioned, the main rivals of the new ZRX are Blu Oval’s Raptor and Ram’s TRX trucks.