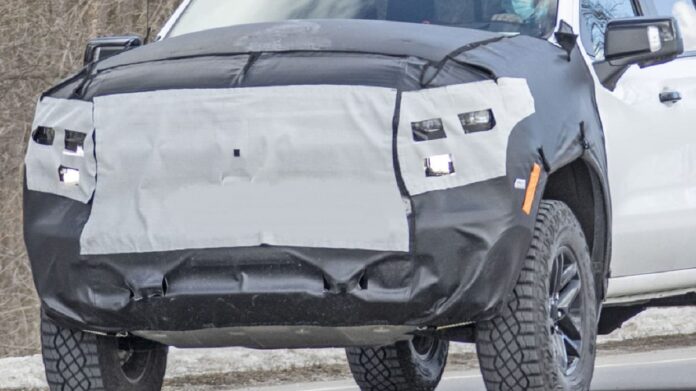 The off-road-ready pickup truck, 2022 Chevy Silverado ZR2, has been spied testing a few days ago. The prototype that is caught testing is hiding behind heavy camo, covering the front and rear fascia. Besides this model, the photograph also captures two more pickups alongside, probably wearing some extra equipment and different trim levels.

For 2022, the Bowtie brand will receive some improvements, and it should be offered with a mid-cycle refresh. The new truck will get a Multimatic DSSV dampers, front and rear locking differentials, unique bumpers, and aggressive off-road tires. On top of that, the ZR2 will deploy the same proven 6.2-liter V8, which develops 420 horsepower. However, there is also a rumor that GM was developing a supercharged 6.2-liter V8 that will be, for the first time, introduced optionally.

The new spy shots of 2022 Chevy Silverado ZR2 reveals more improvements than we thought it would. At first glance, the upcoming pickup truck looks much larger, and it features a more rugged styling. However, as we mentioned briefly, most of the changes are very well hidden under the camo.

Interestingly, we first noticed a hood with a massive bulge of camouflage, concealing a big cowl like that on the Colorado`s ZR2 model. Compared to a Trail Boss version, the front bumper seems to be turned up more at the edges for better clearance. Also, unlike the Trail model, the ZR2 doesn’t have an aerodynamic air dam. We also notice a wide skid plate for protecting all the Silverado’s vulnerable mechanical bits.

Makeover of the 2022 Chevy Silverado ZR2 interior will happen as well, and we can expect a more modern styling as well as the same spacious cabin. Generally, the most exciting news is that it will share many cues from the redesigned Tahoe and Suburban SUVs.

The highlight this time is the new 10.2-inch touchscreen infotainment system that is also present on both mentioned models. Besides, we should also expect standard features like the Apple CarPlay/Android Auto, 6-speaker audio system, 4G LTE, Wi-Fi, and more. All models will also include a forward-collision warning with automatic emergency braking.

The latest 2022 Chevy Silverado ZR2 will be reportedly offered with two engine options, on which one is new. Like the previous model, the Chevrolet will use the same proven 6.2-liter V8, which develops 420 horsepower. This engine is mighty, and as you can see, it delivers excellent performances.

However, GM is also working on a supercharged 6.2-liter V8 from various reports, which should be offered optionally. With this engine, Chevy will rival some of Ram’s and Ford’s trucks.

The 2022 Chevy Silverado ZR2 is expected to be introduced in the coming months, while its sales should start soon after. As we mentioned, the prototype of ZR2 has been spied a couple of days ago, dressed with heavy camo.

Basically, for 2022, it will receive only a mid-cycle refresh that will make it more attractive. Unfortunately, Chevy didn’t reveal any information about its price, but we should expect it to be much higher than before. The current model starts at less than $45,000 and hosts one of the best off-road packages on the market.