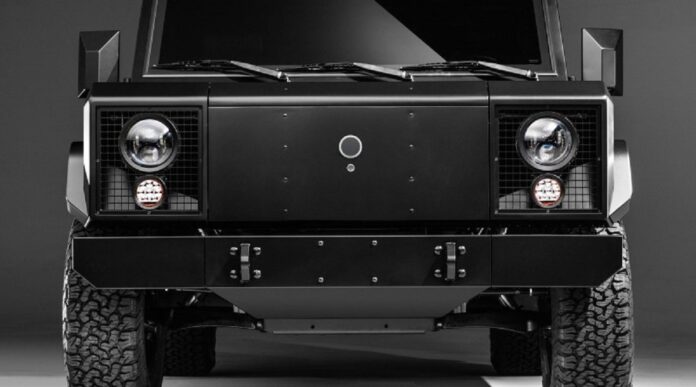 The main threat to the many upcoming all-electric pickup trucks is definitively the new 2022 Bollinger B2. This truck was introduced to the public two years ago, and until now, we didn’t get any information about its release date. According to multiple media reports, the all-electric Bollinger truck will finally be available to purchase later in the year.

Besides an odd design look, this model also features a very simple cabin. Unlike the main rival Tesla Cybertruck and its big infotainment screen, Bollinger B2 doesn’t have anything similar inside to lure customers. Generally, the list of features inside is short and unremarkable. Like the B1 SUV model, the B2 pickup truck features the same electrical system.

Electric vehicle start-up company Bollinger Motors made a very odd pickup truck. Generally, the new 2022 Bollinger B2 is not attractive as the Ford F-150 or Ram 1500, but it’s definitely a unique truck. According to the manufacturer, the new model is off-road capable, and it has 15 inches of ground clearance and around 10 inches of wheel travel.

Unlike the Tesla Cybertruck, the new 2022 Bollinger B2 features an old-fashion cabin that should definitively not lure too many buyers. First of all, don’t expect an impressive list of standard and optional features because Bollinger B2 doesn’t have it. At least it has air conditioning and heated seats.

Also, it offers standard Bluetooth, and it provides six 110-volt outlets and an unspecified audio system. Interestingly, the spot where other models have climate control, the Bollinger B2, has a 16 feet long pass through its center, allowing extra storage. Much like many Jeep models, the B2 has removable doors, windows, roof panels, and windshield.

As we mentioned, the new pickup truck 2022 Bolinger B2 is constructed on an aluminum frame. The company recently reveals that this model will deploy two electric motors capable of producing 360 horsepower and a 472 pound-feet of torque. Interestingly, it comes with an all-wheel-drive system as standard.

It also has under the floor a 120-kilowatt-hour battery, which has enough power for 200 miles of range. At this moment, we don’t have any information if this truck will support fast charging. However, we know that it will come with a payload rating of 5,000 pounds.

2022 Bollinger B2 Release Date and Price

The all-new 2022 Bollinger B2 is a unique pickup truck that should be a threat to many segment models. According to the last reports, the new model will most likely to arrive sometime this year. Generally, it won’t be cheap at all. From some early news, this model could cost around $120,000.

Basically, you can get three Tesla Cybertrucks or almost two Rivian R1T models for such money. Eider way, pre-orders are open, and you can reserve this pickup truck on the company’s official website.

2022 GMC Syclone Thanks to a Supercharged V8 Generates 750 Horsepower